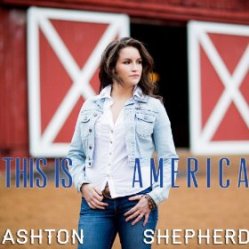 It’s always interesting to see what artistic changes will occur when an artist moves from a major label to an indie.  The conventional wisdom tends to dictate that that artist, now unencumbered by corporate restraints, will be free to release the masterpiece that he or she always wanted to make.  In reality, however, the changes are more likely to occur due to budgetary constraints and access (or lack thereof) to first-rate songs and the guidance of a good producer.  On This Is America, Ashton Shepherd’s  new self-released collection, there isn’t a huge change in artistic direction, which is not entirely surprising since she’s always played a major role in writing her material.  It does suggest that MCA gave her relative freedom to record what she wanted during her two-album stint with the label, though they may not have always marketed the final product aggressively.   The production on This Is America is a little more spare and somewhat generic; whether this is due to personal taste or a smaller budget is not clear.   I haven’t been able to find a producer credit anywhere for the album, but in an interview Shepherd did say that all of the vocal tracks were recorded in one day, which suggests that costs were kept to a minimum.  Unlike the recent self-released album from Pam Tillis and Lorrie Morgan, however, the sound quality on This Is America is excellent throughout.

I enjoy patriotic songs as much as any red-blooded American, but a steady diet of them in recent years, has somewhat eroded my appetite, particularly since many of them appear to have been motivated not by a profound love for God and country but by a desire to capitalize on the emotions of the nation since the September 11th attacks nearly a dozen years ago.   So I can’t say that I was particularly excited when “This Is America” hit iTunes back in July as the album’s advance single.  However,  Ashton sings the song with a great deal of sincerity,  and the song has grown on me with repeated listenings, even though it doesn’t say much that hasn’t been said before.

Like patriotism, nostalgia plays a big role in this album, beginning with the opening number, “Andy”, which looks back at simpler and happier times (that probably never truly existed) and unfavorably compares them to the state of modern life.   Though Ashton is too young to remember The Andy Griffith Show during its initial airing, she does seem to draw more upon her own experiences in the album’s other nostalgic tune “Seventeen Again”, which finds her letting her hair down and reliving some moments of her youth, in an attempt to escape the drudgeries of day-to-day life.   It’s one of the album’s best tracks, and one that with some major label promotional muscle behind it, might have had some commercial potential.

“The Next Time You Cross My Mind”, which sounds like something that Patty Loveless might have recorded in the nineties, is my favorite song on the album, followed by a remake of “Golden Ring”, the George Jones and Tammy Wynette classic, with Daryle Singletary acting as Ashton’s duet partner.   Also quite good is “For Boosin’” (sic) , which tells the tale of a now washed-up country singer whose shot at the big time was sabotaged by a drinking problem.  “Final”, an ambitious ballad that follows a relationship through its various stages – courtship, marriage, divorce and death — is reminiscent of Martina McBride, although Ashton’s performance is much more restrained that I imagine Martina’s would have been.

Overall, This Is America is a solid but not outstanding effort, not unlike Ashton’s major label work.  It doesn’t contain anything truly outstanding or memorable, but it is a pleasant listen and in this age of obnoxiously overproduced arena rock, pleasant is enough.   The album is available for download at iTunes and Amazon, and CD copies can be purchased directly from Ashton’s website.

One response to “Album Review: Ashton Shepherd – ‘This Is America’”