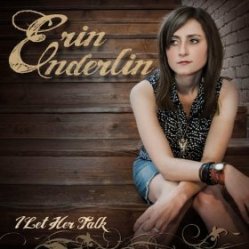 Singer-songwriter Erin Enderlin is responsible as a writer for two of the best songs to hit mainstream country music in the past decade: Alan Jackson’s hit ‘Monday Morning Church’ and Lee Ann Womack’s last chart record, the top 15 ‘Last Call’. Enderlin is also a fine vocalist in her own right, and has just released her second almost full length album (nine tracks). Producer Alex Kline (a multi-instrumentalist and former member of all-girl group the Lunabelles who BNA were promoting a couple of years ago) has orchestrated a traditionally-based sound with a contemporary edge. Dan Dugmore’s steel and Jenee Fleenor’s fiddle are prominent, although it is occasionally just a little too busy-sounding.

New versions of her two big successes are understandably included, and it’s always interesting to hear the writer’s take. An intimate version of the exquisitely sad ‘Monday Morning Church’ with a delicate piano backing is exceptional and tear-provoking. ‘Last Call’ is inevitably not quite as superlative as the hit versions (Erin has an excellent voice but she can’t quite match up to Lee Ann Womack), but it is still very good, and the very tasteful production supports Erin’s vocal perfectly.

Erin clearly has a gift for story songs, and there are some great examples on this record, brought alive in vivid color. The excellent title track is cowritten with the wonderful Leslie Satcher, and is a real highlight. It is written from the viewpoint of an initially sympathetic listener who, while taking refuge from her own troubles in a bar, listens to another woman tell her story of a sordid affair, with a devastating twist:

Another excellent story song with a bar room and cheating theme, but one more sympathetic to the woman, the very closely observed ‘Get That At Home’ is a about a desperately lonely wife fending off feelings of guilt over her pending first-time adultery. She wouldn’t be out looking for love elsewhere,

If she felt that he still loved her.

The dark-tinged exploration of a conversation with a man whose drink problem has wrecked his life, ‘You Don’t Know Jack’ is another highlight; it has been recorded by hit maker Luke Bryan, and was one of the few redeeming factors on his 2011 album Tailgates and Tanlines, and has also been cut by independent artist Jamie Richards. Erin’s version has an appropriately stark and lonesome feel.

The optimistic ‘Finding My Voice’ is about a woman leaving a bad relationship and finding herself, and is a very good mid-tempo number. The assertive ‘Unbroken’ triumphs over a lying cheating ex, and might have commercial potential.

The vibrant up-tempo ‘Countryside’ offers a gender twist on the hackneyed theme of country boy and city girl; it’s quite enjoyable and refreshingly actually sounds country, if a little bit busy production-wise. It’s very well-played, but there are just a few too many instruments to allow the song to breathe. ‘Good Kind Of Pain’ is a mid-tempo ballad about an obsessive love, and is yet another well-written song with a committed vocal, but the production feels a little cluttered.

It’s a shame one more track wasn’t included to round out the set, especially as she included versions of the two big hits on her last EP, and also that it is only available digitally, but this is still warmly recommended. It’s an indictment of the current country music industry that Erin isn’t either already a big star as an artist or on the fast track.

One response to “Album Review: Erin Enderlin – ‘I Let Her Talk’”