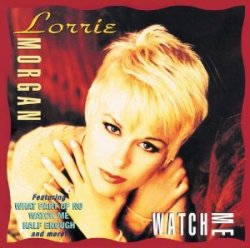 Lorrie Morgan’s third release teamed her up once again with Something In Red producer Richard Landis, but 1992’s Watch Me is a less pop-oriented collection that sounds like a less ballad-heavy continuation of 1989’s Leave The Light On. The uptempo title track “Watch Me” was the first single sent to radio. More radio-friendly than “Something In Red”, the single that had preceded it, “Watch Me” delivered a “Five Minutes”-style ultimatum to an errant lover and stopped just short of becoming Morgan’s second chart-topper, peaking #2. She closed the deal, however, with another uptempo number, “What Part of No”, which found her giving the brush-off to an unwanted suitor. Spending three weeks at #1, it became the most successful single of her career and is one of her best remembered hits today.

The album’s third single and one of my all-time favorites was the ballad “I Guess You Had To Be There”, which had Lorrie once again confronting a cheating spouse, albeit less assertively than the album’s title track. As the song opens, she greets her husband upon his return from work and proceeds to tell him about her day — how on her travels she’d seen a happy couple in love and the impression it had made upon her. Her spouse’s lack of response prompts her to say, “I guess you had to be there”. The listener learns in the final verse that he was indeed there, and was one half of the happy couple spotted in a cafe. Kris Kristofferson portrayed the philandering husband in the song’s video. Surprisingly, it only reached #14. Lorrie returned to the Top 10 with her next single, the more lightweight and catchy midtempo “Half Enough”, which rose to #8.

The always reliable Skip Ewing had provided “Autumn’s Not That Cold”, one of the best cuts from Something In Red, and he made another contribution this time around, the excellent “You Leave Me Like This”. Likewise, “Something In Red” writer Angela Kaset contributed “From Our House To Yours”, a ballad about a lifelong friendship, that is just a little too sing-songy to truly work well. Much better is Lorrie’s surprisingly good cover of “It’s A Heartache”, a song that had first been introduced by Juice Newton in 1977 and covered by Bonnie Tyler who had a huge international pop hit with it that same year. Morgan’s version is better than both of them, and it probably would have had hit single potential had it not already been so well known and closely associated with Tyler.

Watch Me didn’t chart as high as Lorrie’s previous albums, reaching only #15 but it sold well enough to earn platinum certification. It re-established her country credentials after some of the pop experimentation of Something In Red. It was also her first album for BNA Records, a former indie label that had been acquired by BMG Music earlier that year to be a sister label to RCA. Lorrie was at that time the imprint’s biggest and best-selling star, though she would eventually be eclipsed by labelmates Kenny Chesney, Lonestar, and John Anderson.

Twenty years after its release, “What Part Of No” is possibly the only song from Watch Me that is familiar to many younger listeners, but if those fans are inclined to delve a little deeper into Lorrie’s catalog will find much to like in this collection.