Single Review: Chris Stapleton – ‘What Are You Listening To?’ 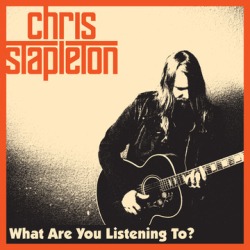 Chris Stapleton has been one of Nashville’s premier songwriters for some years. He has also been known to discriminating music listeners as the lead singer on the SteelDrivers’ first two albums, each of which were recognised by Grammy nominations. Now he takes center stage with a mainstream major label deal as a solo vocalist on Mercury Records. His debut single is available for download now, and a full length album is expected later this year, both produced by veteran Tony Brown. Brown is an inspired choice for Stapleton, whose eclectic tastes have led him in the past to make music spanning country, rock, blues and bluegrass genres.

The gently paced mid-tempo ballad is not really traditional country, with blues and soul influences evident. However, its mellow feel and attractive melody make it more than listenable, helped along by a sympathetic production, the artist’s distinctively smoky, bluesy voice, and the sweet harmonies of his wife Morgane Hayes. The protagonist wonders a little wistfully what the music his ex is listening to implies about her emotional state – is she still not over him, and listening to sad songs, or a love song for a new love interest. He himself is clearly fixated on a record which reminds him of her.

Stapleton has a big powerful voice he is capable of letting rip as he did with former band the SteelDrivers, but here he shows all the understated restraint this downbeat number needs. There is still passion and feeling here, but it is channeled in a more subtle way.

I hope this is not too tasteful for country radio to deal with, because not only is this a fine record in its own right, but Stapleton is a major talent who deserves to be heard.

3 responses to “Single Review: Chris Stapleton – ‘What Are You Listening To?’”