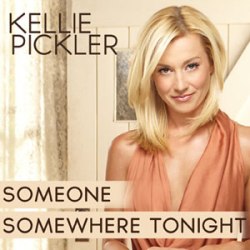 One of the great surprises of the spring television season has been Kellie Pickler’s turn on Dancing With The Stars. The show’s platform has been invaluable to her public image, helping her shatter any last strands of the ditzy blonde who came in fifth on American Idol and allowing her to show the confident and mature woman she’s become.

And it seems, unlike Blake Shelton, she’s using the platform for good. Pickler has gotten around to showing us the first signs of the ‘Kellie Country’ she said would come from her Black River Entertainment debut, and the results are beyond expectations. Her new single is “Someone Somewhere Tonight” a too-good-to-ignore Pam Tillis album cut from her 2007 album Rinestoned that perfectly displayed Tillis’ otherwordly voice in a master class of power and control unlike anything Nashville had seen since the Patsy Cline era. Pickler is clearly walking hallowed ground, and thankfully is more than up to the task.

There isn’t much that can be said about the quality of Davis Raines and Walt Wilkins’ lyrics. The story is a striking juxtaposition between innocence (baby’s first steps, a first kiss) and corruptness (death, alcoholism, a life in jail), and their simultaneous harmony in our world. The song would elevate the quality of country music in any era to unimaginable heights, and the artist singing it would have a career moment. “Someone Somewhere Tonight” is just that good.

The inevitable comparisons between Tillis and Pickler are unfair as both bring their own vocal quality to the track with neither turning in the ‘better’ performance. Pickler’s voice is more delicate and twangy and that works to her advantage in selling the story. The urgency she brings to the line “Someone somewhere tonight/ Is stuck in a prison/ Breathin’ but just barely livin’ Behind walls of their own” is so breathtaking, I realized I’d forgotten there was a time when country singers actually could relate (on a deeply personal level) to what they were singing about.

The production on the track is mostly stellar, but I could’ve done without the electric guitar that sits just underneath Pickler’s compelling vocal. The accompaniment also gets too loud towards the end, when the song builds to the emotional crescendo. But the prominent fiddle and steel guitar ground it in the traditional place Pickler came from on 100 Proof and not the horrendous pop/rock she tried out on her other two releases. She’s keeping it fairly neo-traditional and deserves credit for sticking to her artistic creativity.

But I’m most impressed that Pickler recorded this song at all, especially in an era where radio doesn’t support music of this high a caliber. If this first taste of her upcoming album is any indication of its quality, than we might be looking at a modern day throwback to the astute female vocalists from the 80s and 90s – ones who actually knew the difference between a great and bad song – and I couldn’t be happier about it. It’s about time someone championed that type of music again, and Pickler seems like the right artist to do just that.

Here’s Kellie giving the story behind the song.