Album Review: Georgette Jones – ‘Till I Can Make It On My Own’ 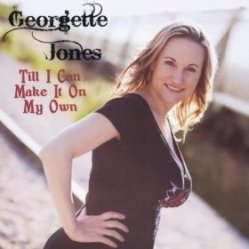 Georgette Jones’s third Heart of Texas album features her best vocals to date, but her least imaginative selection of material, as this album has been conceived as a tribute to mother Tammy Wynette. She does not sound much like either illustrious parent, but her light airy vocals have a very attractive tone which makes her worth listening to on her own merits. Her phrasing is also excellent with a natural, unforced feel. Like all Heart Of Texas records, this is impeccably produced (by the label’s Justin Trevino) in traditional country style, so it makes pleasant listening even if the repertoire is over-familiar.

Georgette’s voice works particularly well on the title track, which has a wistful air to it distinguishing it from the more impassioned original. A languid take on ‘Til I Get It Right’ with tasteful string accompaniment is also a highlight, with a subtle vocal interpretation. ‘Take Me To Your World’ is sweet and sincere, with very pretty harmonies. She sounds resigned on an understated ‘Stand By Your Man’, which I liked. The less well known ‘Stayin’ Home Woman’ and ‘Run Woman Run’ are also both quite enjoyable

There are several duets. Producer Justin Trevino helps out on the George Jones-penned ‘Take Me’, which is nicely done although it pales rather compared to the original. Billy Yates guests on ‘Golden Ring’, which is pleasant but again lacks the original’s force.

Veteran Tony Booth enjoyed a minor career on Capitol in the 70s, before backing Gene Watson for some years, and his deep, grizzled voice makes an interesting contrast with Georgette’s insubstantial sweetness on ‘My Elusive Dreams’, and one which suits the song quite well.

Someone called Keith Nixon shares the vocals on the playful ‘Something To Brag About’; this one is fun. A duet with Amber Digby on ‘Run, Woman, Run’ is repeated from Georgette’s last album, Strong Enough To Cry.

Georgette’s voice is a little too sweet and gentle for ‘D-I-V-O-R-C-E’ to have its full impact, although she is convincingly vulnerable. Her resolve to lose her respectability does not however convince on ‘Your Good Girl’s Gonna Go Bad’. ‘Apartment # 9’ is delivered plaintively, but didn’t make much of an impact on me.

The CD liner notes comprise several family photographs of Georgette with Tammy, so if you want Tammy’s recipe for banana pudding (topped with meringue) this is the place to find it.

While not an essential purchase, I rather enjoyed this record.

One response to “Album Review: Georgette Jones – ‘Till I Can Make It On My Own’”