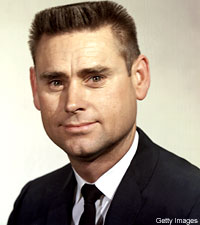 With the passing of George, all the radio heroes of my early childhood, except Ray Price, have gone from the scene. I can’t tell you exactly when I became cognizant of George Jones, as he seemed to have always been there. I remember radio playing songs such as “White Lightning”, “Who Shot Sam?”, “Don’t Stop The Music” , “Just One More” and You Gotta Be My Baby” during the 1950’s and liking the sound of the records, although not necessarily understanding what they were about.

I can tell you when I became a real fan of George Jones and when I started understanding what his music was about. In 1961 I turned nine years old and lived across the street from a kid whose father manifested all of the bad behavior that was revealed in George’s songs. While many sang “the endless ballads of booze and broads” in those less politically correct days, George brought a depth of emotion that few could achieve. But while many singers mined those same waters, few were also as good at singing of other matters such as love and faith. Let’s face it, George Jones could sing even the most mediocre and most maudlin songs with convincing sincerity, so when he had good material to work with, the results transcended what everyone else was doing.

For my money, the very best recordings George Jones ever recorded came during the 1960s. Yes, he became a more nuanced singer later, but he was already 98% at his nuanced peak and his voice was at its absolute peak.

During the 1950s George recorded for Starday and/or Mercury (there were some collaborative efforts between the two labels) and while there was considerable youthful enthusiasm there, the polish had not yet been applied. Towards the end of his run on Mercury a few songs were released that heralded the direction George was going – “The Window Up Above”, “She Thinks I Still Care”, “Tender Years”, and “You’re Still On My Mind”. These songs exhibited a little more careful production than was often the case and were far more introspective than the usual “ballads of booze and broads”. While “You’re Still On My Mind” was not released as a single until after George left Mercury (and accordingly received no promotional push) it was an impressive effort and earned the songwriter Luke McDaniel some additional money when the Byrds included it on their Sweetheart Of The Rodeo album.

I have said many times the 1960s were my favorite era for George Jones recordings. In 1961 George’s recordings started appearing on the United Artists label. While perhaps a bit heavy on the strings and vocal choruses, these recordings feature strong material and find George in fine voice throughout. This era kicked off with a magnificent single, “She Thinks I Still Care” b/w “Sometimes You Just Can’t Win” as the B side. The A side shot to #1 where it stayed for six weeks. I thought the song on the B side was the stronger song – and it proved its worth by shooting to #17. (A new recording of the song would reach the top ten in 1971 for Musicor, plus it would be covered by many other artists) . What better description can you have of despair than

The quality never let up during the United Artist years. Since I had a very happy childhood, never wanting for anything important, I learned about life’s other facets through George’s songs, songs that enabled me to understand much more about life than my comfortable upbringing allowed. George imbued such depth of emotion into songs such as “Just A Girl I Used To Know”, “Not What I Had In Mind”, “You Comb Her Hair”, “Where Does A Little Tear Come From”, and the only seemingly humorous “The Race Is On”, that they were better psychology lessons than anything I was ever taught in school.

During this period, George was paired with his best ever duet partner, Melba Montgomery. Male-female duets don’t get any better than “We Must Have Been Out of Our Minds”.

Until George signed with Epic in order to record with his then-wife Tammy Wynette, George’s records were produced by his manager Pappy Daily, a small-time operator who recognized a gold mine when he saw it and made decisions predicated upon his own best interests than those of his client. One such decision was moving George to the Musicor label in 1965. Pappy had an ownership interest in Musicor, an indy label with erratic distribution, so over to Musicor George went.

For Musicor, George recorded some of the best singles of his career, countless novelties (“Love Bug”, “4033”, “I’m A People”), many covers of other artists’ hits (often doing them better than the original artist) and a bunch of filler. And you know something – with George singing the songs even the lowliest filler material sounds okay and even the silliest novelty seems meaningful.

And the good songs? Suffice it to say, most of my favorite George Jones songs come from this period, classics such as “Take Me”, “I’ll Share My World With You”, “Walk Through This World With Me”, “When The Grass Grows Over Me” (if I must listen to a maudlin and morbid death song, I much prefer this song to “He Stopped Loving Her Today”) , “Where Grass Won’t Grow” and “A Good Year For The Roses”. Not all of these were #1 hits since finding Musicor singles to purchase could be a challenge, but they are all songs that deserve to be remembered.

George continued to record for decades after the 1960s but I’ll leave it to the younger folks to tell you about the later songs. During my early college years (1970-1973), George Jones and Tammy Wynette had a music park in Lakeland, Florida that I occasionally visited and sometimes was lucky enough to see George Jones and/or Tammy perform.

The songs of George Jones have always been part of the musical backdrop of my life. He’s not my absolute favorite artist (The Hag, Ernest Tubb and Webb Pierce are) but I consider George Jones one of the four or five greatest artists in the history of the genre. The death of George Jones feels like the death of an old friend, one that’s been with me for the entire ride. I‘ll close this with the part of the lyrics of George Jones at his best (and dedicated to my wife of 37 years, Kay):