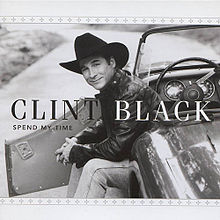 The early 2000s brought a sea of change in Clint Black’s career. After the massive success of “When I Said I Do,” Black took three years away from the business to raise his daughter, who was born in 2001. His contract with RCA Nashville also expired during this time and left Black the opportunity to form his own label, Equity (the label that put Little Big Town on the map with The Road To Here in 2005.)

His first full-length project for the label, Spend My Time was released in 2004 and marked Black’s first album of all-new material since Nothin’ But The Tailights in 1997. He again produced the project solo, keeping with the tradition he set with his all acoustic set in 1999.

While Spend My Time was a comeback of sorts for Black, the changing tide of country music left very little room for the album on radio playlists and as a result, the singles faired poorly. He just missed the top 15 with the title track, a lovely ballad he penned solo. It’s a fantastic song about the passage of time, and while it could’ve been very cliché, he keeps it sincere with his honest vocal and neo-traditional arrangement.

He wrote #51 peaking second single “The Boogie Man” with noted songwriter Will Jennings. Black wrote the track for his young daughter and it exudes a pleasing playfulness that he nicely brings out in his vocal. The production, however, is a bit uncharacteristically thick and rockish for Black, but he keeps it in check with ear catching bluesy piano throughout. Final single “My Imagination,” a nice string heavy ballad, peaked at #42.

Like the majority of Black’s musical catalog Spend My Time is a solid effort. It’s clear he’s played with his winning formula a bit, taking out overly traditional arrangements and adding in a dash of poppier sounds that give the project a contemporary flare that keeps it modern without sounding dated. He also manages to sound completely himself, and avoids the pitfalls of changing too much too quickly.

The ballads are the record’s best tracks, toned down to offer nice clarity. “Whatever Happened” has a nice acoustic guitar laden melody while “Just Like You and Me” raises above Black’s somewhat shouty vocal thanks to ample steel. Those same elements also elevate “Someone Else’s Tears” and “A Lover’s Clown” sounds like something Black would’ve put on any of his mid-90s work.

I do have an issue with him vocally, however. He tends to over sing almost all the songs here, like his vocal was turned up to eleven while the backing music doesn’t match that intensity. He would’ve succeeded even further if he had just a bit more subtlety in his voice. That being said, his vocal gymnastics are well matched on the ample uptempo material, the places on Spend My Time where the album ranges in quality.

Black’s upbeat ‘sweet spot’ if you will are on tracks like “State of Mind” and “The Shoes Your Wearnin,’” where the drums and guitars don’t interfere with the song, but allow Black to roll along with a nice energy. Unfortunately, none of those such moments are found here. The reggae influenced “We All Fall Down,” 80s rock inspired “She’s Leavin,’” and choir heavy “A Mind To” are nothing more than noise, too loud in every respect to be enjoyed for the interesting lyric they probably are.

“Haywire” works beautifully because it leaves space for Black to deliver bluesy riffs reminiscent of “Put Yourself In My Shoes” that are firmly in his wheelhouse. It may not be to my personal taste, but it’s one of the standout tracks. “Everything I Need” is also very good, if a bit too loud. I’m not a huge fan of guitar rockers (like Brad and Keith are known for) but he makes this one work.

Overall, Spend My Time isn’t a bad album at all and marked a worthy return for Black. He still in fine voice and keeps the material up to his usual standard even if none of these songs (apart from the title track) are memorable in any significant way. He just needs to tone everything down a few notches and find a bit more tenderness, and he may’ve come closer to hitting a home run. As it stands Spend My Time is good effort that could’ve been a lot stronger. But I appreciate that he’s clearly putting in effort.