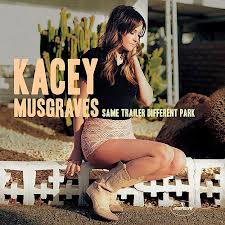 A major reason for my disillusionment with modern commercial country music is the lack of the mature adult female prospective that elevated the quality of radio playlists throughout the 1990s. The absence of Matraca Berg and Gretchen Peters songs on major label albums (and the decline in popularity of artists such as Pam Tillis, Mary Chapin Carpenter, Kathy Mattea, Patty Loveless, and Trisha Yearwood) has left a noticeable gap, one filled with unsatisfying party anthems and the occasional attempt at a throwback that just never quite quenches the thirst.

Thank goodness for Kacey Musgraves. The 24-year-old former Nashville Star contestant from Golden, TX is the take-no-prisoners rebel country music needs to get out of its funk. Same Trailer, Different Park is the strongest commercial country album I’ve heard in ages, filled with timely songs that say something relevant to the modern world. She has a way of crafting lyrics that touch a nerve without seeming offensive that goes well beyond her years.

Initially I will admit I wasn’t floored by “Merry Go ‘Round” the way that most everyone else was, because I managed to get it lost in the shuffle when it debuted late last year. I now fully see the genius in it – the striking way Musgraves (along with Shane McAnally and Josh Osborne) paints a deeply honest portrait of small town life so simply. She also brings those same qualities to her new single “Blowin’ Smoke,” which includes a genius play on words (literally smoking/wasting time) for added effect.

I found that a main commonality in the records I’ve loved in past few years are lyrics containing interesting couplets, and Same Trailer Different Park is no different. The obvious example is scrapped second single “Follow Your Arrow,” which among other things, brings the equality debate firmly to the forefront:

Say what you feel
Love who you love
‘Cause you just get
So many trips ’round the sun
Yeah, you only
Only live once

To me it’s a shame that the country music industry has evolved into a place where such a song can’t be given its due, especially since it’s not so different from such classics as “The Pill” or “The Rubber Room,” and is an anthem for our times. Personally I celebrate her boldness (which in actuality is pretty tame) and quite enjoy both the banjo driven musical arrangement and her uncomplicated twangy vocal. The track’s overall feel good attitude really works for me.

Another favorite line, ‘You sure look pretty in your glass house/You probably think you’re too good to take the trash out’ opens another confident statement piece, “Step Off,” which plays like the typical breakup ballad sans petty revenge. Also slightly atypical is the similar themed “I Miss You,” another love gone wrong song, but this time with the added vulnerability of actually missing the guy she’s broken up with. It’s nice, and a refreshing change of pace, to hear someone still grappling with feelings towards the ex instead of just writing them off in a typical Taylor Swift type scenario. The gently rocking “Back On The Map” goes even a step further and finds Musgraves pleading for a date, telling the men of the world “I’ll do anything that you ask.”

That’s a far cry from “Keep It To Yourself.” Musgraves does a brilliant job of playing the strong woman here, and like Lee Ann Womack’s (a major influence) “Last Call” she doesn’t buy into an ex’s advances once he’s under far too strong an influence:

Possibly the strongest aspect of Same Trailer is the emotional range Musgraves covers in the songs. Everyone knows that life has its share of euphoric highs and crushing lows, even if most modern music hardly reflects that at all. She manages to pack desperation into the majority of the album albeit her own (“Back On The Map”) or society’s (“Merry Go ‘Round”) but also touches on the idea of finding one’s place in the world, no matter how scary. “Follow Your Arrow” is as much about love as life and “Silver Lining” takes it to the next level, saying “If you wanna fill your bottle up with lightning/You’re gonna have to stand in the rain.” The sunny steel guitar-laced atmosphere suggests she thinks going through life’s fire is a joyous undertaking, and while the outcome might be so, getting there more often than not, isn’t.

Probably the frankest moment of desperation comes from “It Is What It Is,” a McAnally, Brandy Clark co-write that finds Musgraves dealing with the after effects of a relationship in which the pair is ‘so much alike’ they’re doomed to failure, but can’t get enough of each other. I love the simple steel-fronted arrangement and how Musgraves so beautifully brings out the pain on the final chorus by starting it a cappella:

But I aint got no one sleepin’ with me,
And you aint got no where that you need to be,
Maybe I love you,
Maybe I’m just kind of bored,
It is what it is
Till it aint,
Anymore

“My House” comes on the flipside to the heaviness of the other tracks, providing a welcomed respite and chance for Musgraves to show off a playful side (she is young, after all) without resorting to fluff territory. I love the Dylan-esque 60s folk arrangement here a lot, especially the harmonica and upright bass. The humorous and memorable line, ‘Water and electric and a place to drain the septic’ doesn’t hurt either.

The main criticism Musgraves has gotten for the project is the demo-like delivery of the tracks, almost too under produced. I don’t hear it at all because in my opinion this is how music is supposed to sound – uncomplicated and straightforward. One of my favorite people, Luke Laird, produced the album and he did an incredible job of bringing the tracks to life. The album does verge on being a bit too pop in places and I still can’t figure out the metaphor she was reaching for on “Dandelion,” but this is as close to perfect (and country) as a mainstream album is likely to get in 2013. Loretta Lynn, who’s longed for songs that actually say something, should be very proud.