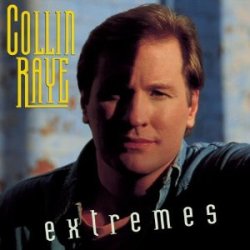 Mainstay John Hobbs was joined by Ed Seay and Paul Worley to produce Collin’s third album, extremes. There was a concerted effort to expand Collin’s range with more rocking material, an artistic mistake in my opinion, but it was rewarded with commercial success, with five top 10 hits and platinum sales.

Collin screams out the first single, Lee Roy Parnell’s ‘That’s My Story’, a husband’s attempts to brazen out blatant lies to his wife. The amusing tale would have worked well for Parnell (and the arrangement and production are very much in his style, but it really doesn’t suit Collin’s voice, even though it was a #6 hit for him. The album’s only chart-topper, the fourth single, ‘My Kind of Girl’ is also a screamer, but a lyrically boring one.

Happily, the album also contains some beautiful ballads more in Collin’s style. Although it peaked just short of the top slot on the charts, ‘Little Rock’ may be the most important song ever recorded by Collin Raye, with its abashed, clear sighted depiction of a recovering alcoholic doing his best to cope with the loss of his wife as well as maintaining his sobriety. Written by Tom Douglas, perhaps it could do without the swelling strings, although the song’s strength is undiminished.

My favorite track is the melancholy lost love ‘Man Of My Word’, which peaked at #8. Written by Allen Shamblin and Gary Burr, it is a beautiful song in which the protagonist’s fidelity outlasts her loss (perhaps her death), gently paced and set to a lovely melody, with a subtle interpretation by Raye.

When I said my love would last for all time
And no one would take your place
Well, if that promise was the last sound you heard
Well, you know I kept it
I’m a man of my word

The final single, #4 hit ‘If I Were You’ is a big ballad written by Hobbs with Chris Farren with a heavily strung arrangement. It’s quite prettily done, but not very memorable.

The best of the up-tempos is the fast story song ‘To The Border And Beyond’, which Collin wrote. Some wildly sawing fiddle backs up a frenetic vocal as Collin spits out the story of the outlaw Dugan. ‘Nothin’ A Little Love Won’t Cure’ is another rocker, and is an okay song written by the curious partnership of Rick Bowles, Don Cook and Larry Boone.

Written by Craig Wiseman and James Dean Hicks, the warm-hearted tale of a mother’s farewell gift of ‘A Bible And A Bus Ticket Home’ to a teenager leaving home with Nashville dreams, is tenderly sung and a definite highlight.

A cover of the classic ‘Dreaming My Dreams With You’ sounds very pretty, while ‘Angel Of No Mercy’ is another love song with a lovely melody, both ideally suited to Collin’s voice.

Despite some missteps Extremes is still a worthwhile purchase, especially as it can be obtained cheaply.