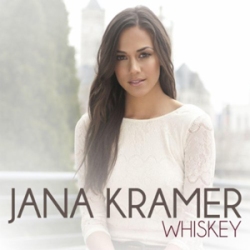 It was surprising last year when actress turned country singer Jana Kramer broke through the three-woman world of country radio and managed to score the top 5 hit “Why Ya Wanna.” But it was almost shocking that the song was a fiddle, steel guitar, and twang soaked waltz. This almost revelatory move, she’s the first woman since Taylor Swift to see their debut single chart so high, has come with its share of perks – Kramer is one of 10 artists in CMT’s Next Women of Country Campaign and the ACM just nominated her for Top New Female Vocalist.

In similar fashion to “Why Ya Wanna,” a lament about an always-present ex, follow-up single “Whiskey” casts Kramer as a woman being played, this time by a man as addicting and tantalizing as the titular alcoholic drink. Writers Catt Gravitt and Sam Mizell get every detail right, allowing the listener to feel the protagonist’s catch 22; he’s pulling her in even as she sees all the signs to run in the opposite direction.

While it’s nowhere near the league of “Well the cold hard truth revealed what it had known/that boy was just a walkaway Joe” or “I know you don’t think I should go/there’s some things a mama don’t know,” “Whiskey” is a strong defiant woman song and Kramer sings the fire out of it. Her phrasing may be a tad girlish in places (not unlike Jewel at times), but she has a powerful voice and the twang to covey her character’s heartache.

The production is the track’s real achievement, though. Besides Zac Brown Band, there hasn’t been this much audible fiddle and acoustic guitar on a mainstream single in a long time, and she and producer Scott Hendricks deserve credit for not marring the track with any electric guitars or loud crashing drums. I do wish he’d gone further into neo-traditional territory, leaving out the poppish ‘ooohs’ in the intro and adding in steel guitar, but you can’t fault him for slicking it up just enough to get it airplay. In any event, “Whiskey” is allowed to properly breathe, and it’s a refreshing change of pace from the normal mainstream fare (especially that of her fiancé Brantley Gilbert)

I also can’t help feeling that the lyric is a tad lightweight, centering on the sparks felt during a kiss and leaving out any substantial Gretchen Peters-like details of the damage to her psyche as the disintegration of the relationship brings the song to an end. The writers may’ve gotten the push and pull down, but it would’ve been nice to have a few details (more significant than what we get in the bridge) of her condition in the wake of her intuition being proven right.

But the charming production more than makes up for any lyrical deficiencies, easily elevating “Whiskey” into one of the year’s more interesting singles (and my personal favorite from her debut album). It’s a nice slice of addictive ear candy and another winner from a very promising talent.