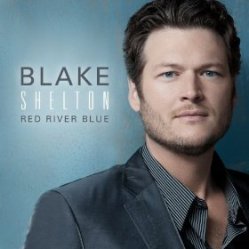 2011’s Red River Blue marked Blake Shelton’s return to the full-length album format, following a pair of “Six Pak” EPs that were released the year before. Like Hillbilly Bone and All About Tonight, Red River Blue was produced by Scott Hendricks. It is more pop-leaning than his earlier work under Bobby Braddock’s guidance, but it has also been far more successful commercially. Shelton’s record sales have likely enjoyed a boost due to the exposure he has enjoyed as a judge on NBC’s The Voice.

The album’s first single was “Honey Bee”, which was written by Rhett Akins and Ben Hayslip. It’s lyrically fluffy and not terribly country, despite name-checking Conway Twitty and Loretta Lynn, but nevertheless it’s a catchy, fun tune. It quickly shot to #1 and sold more than two million digital downloads. The second single is a cover version of “God Gave Me You”, which was written and originally recorded by contemporary Christian singer Dave Barnes. I like the song and Blake’s vocal performance, but Scott Hendricks’ production is borderline-bombastic, though one could argue it is restrained in comparison to some of the other songs on the album. It too reached the #1 spot, as did the two subsequent singles “Drink On It” and “Over.” “Drink On It” is a little closer in style to Blake’s earlier work, though the production is a bit too slick for my liking. “Over”, however, crosses the line with overwrought production on the chorus, which is a shame because the song itself is not bad and would have benefited from a more understated arrangement. Heavy-handed production similarly mars an otherwise very good cover of Dan Seals’ “Addicted”, which is one of two bonus tracks on the deluxe version of the album.

As one might glean from the title, “Good Ole Boys” is the most country-sounding track on the album, with a beat that is reminiscent of Waylon Jennings. It laments the disappearance of the good ol’ boy and is one of the best tracks on the album, though I could have lived without the gratuitous reference to feminine hygiene products in the song’s final twenty seconds. Also quite enjoyable is the ballad “I’m Sorry” which features a guest harmony vocal performance by Martina McBride. The title track, on which Blake is joined by Miranda Lambert is one of the quieter tunes on the album. It is one of the album’s highlights and it concludes the main setlist. The deluxe version of the album contains two bonus tracks, the disposable “Chill” and the aforementioned “Addicted”. There is only one track on the album that I dislike: the grating “Hey” with its dumbed-down lyrics and irritating beat.

Red River Blue isn’t Blake Shelton’s very best work but it does have its good moments and it is a lot better than most of what is on the country charts these days. Admittedly, that is setting the bar low, but the album is worth seeking out.