Leave a comment Posted by Jonathan Pappalardo on November 8, 2012

Two singles (not counting his grotesque 2011 holiday single “Christmas All Over The World”) into his first post-Curb career resurrection project, Tim McGraw is proving extremely frustrating. I firmly wrote him off as a has-been after he crammed that “Truck Yeah” garbage down our throats, and vowed never to give him my attention again. But with “One Of Those Nights,” he has returned to the artist he used to be, the hit maker I grew up listening to all those years ago.

It’s almost revelatory to hear a McGraw single these days with a straightforward unprocessed vocal, simple melody, and somewhat interesting story. I only wish the proceedings weren’t so bland, with McGraw coming off sounding pedestrian. He needs far stronger lyrical content coupled with something fresh and exciting in the arrangement if he wants to redeem himself for the poor song choices he’s made in the past six or so years. “One of Those Nights” puts him firmly on the right path, but he still has a long way to go before I can really get excited about his music again.

So why am I not liking this as much as I should? Well, something about it feels slightly off. The banging drums throw off the organic vibe of the track and seem like an excuse to make the proceedings loud in places to fit within the constraints of country radio. And the repeating of the opening line at the end feels like an afterthought. But that being said, “Better Dig Two” is still the best mainstream country single released this fall, proving once again that The Band Perry are scary good.

George Strait – Give It All We Got     Listen 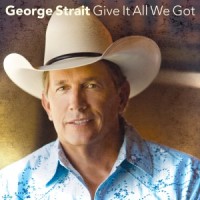 At 60 George Strait is releasing the best music of his career, proving what a little bit of reinvention can do to keep country radio within grasp without slickening up the production to fit in with the Jason Aldeans of the world. But more than that he’s accomplished the near impossible by delivering a love song about bedding a woman all the while keeping the track completely age appropriate. It’s a remarkable feat and he should be rewarded for adequately pulling it off.

“Give It All We Got” is the forward thinking tour de force “Run” was ten years ago and it shakes up his traditional leaning formula just enough (I love the echoing technique in the chorus) to keep him modern and relevant in all the right ways.