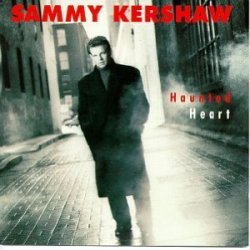 Sammy Kershaw’s sophomore effort reunited him with producers Buddy Cannon and Norro Wilson, whose collaboration had helped Don’t Go Near The Water achieve platinum-level sales. 1993’s Haunted Heart continues in a similar vein. It too achieved platinum status, but it also improved upon its predecessor’s inconsistent success with country radio; all of Haunted Heart’s four singles landed in the Top 10, unlike Sammy’s previous effort which had produced only two Top 10 hits.

Straight out of the box, the catchy lead single “She Don’t Know She’s Beautiful”, written by Bob McDill and Paul Harrison, rose all the way to #1, becoming the first and only chart-topper of Kershaw’s career. The upbeat title track was the album’s worst performing single, peaking at #9, while the similar sounding “Queen Of My Double Wide Trailer” performed slightly better, reaching #7. The latter song, written by Dennis Linde, is marred by somewhat cliched and silly lyrics, but its catchy beat makes it enjoyable nonetheless. The fourth and final single, “I Can’t Reach Her Anymore” is the best of the group and ranks right up there with “Yard Sale” as one of Kershaw’s best singles.

Aside from the hit singles, Haunted Heart is noteworthy for some of its supporting personnel. The legendary Weldon Myrick, famous for his work with Connie Smith, plays steel guitar on that album, and one of the background vocalists is Sammy’s labelmate, the then largely unknown Shania Twain. She can be heard most prominently on the excellent Dean Dillon and Danny Kees composition “What Might Have Been”. It’s too bad that Shania’s own discography doesn’t contain material like this. Another standout track is the beautiful ballad “Still Lovin’ You”, which despite its inclusion on Sammy’s 1995 The Hits: Chapter 1 compilation, was never released as a single. The steel guitar track and Melonie Cannon’s harmony vocals are beautiful.

However, not all of the album’s material is stellar; there are two duds in particular — the novelty tune “Neon Leon” which really wears thin with repeated listenings, and “You’ve Got A Lock On My Heart”, which was written by producer Buddy Cannon with Larry Bastian. Heavy on electric guitar, it’s the least traditional song on the album. Another artist might have made it work, but it’s a stretch for Sammy and it really doesn’t fit well with the rest of the album. All is forgiven however, with the closing track, a contemporary take on the Bill Monroe classic “Cry, Cry Darlin'”. Unlike the original, this version does not have a bluegrass arrangement; the electric guitar is a bit intrusive at times, but the pedal steel and harmony vocals are superb.

Casual Sammy Kershaw fans may be content to own just his hits compilations, but there are enough gems among this collection’s album cuts to make it worth purchasing. It can be easily obtained at bargain prices.