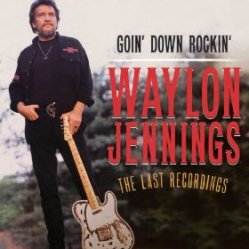 It’s been over a decade (February 2002) since we lost the great Waylon Jennings, and four years since the release of Waylon Forever, the collaboration released by his son Shooter Jennings. Since Waylon had been in poor health during the years immediately prior to his death, I had assumed (and feared) that we’d heard the last new recordings from Ol’ Waylon.

It turns out that I was wrong, and I’ve seldom been so pleased to be wrong about something. In September 2012, Goin’ Down Rockin’: The Last Recordings will be released. The album will include twelve songs, written and recorded by Jennings along with his bassist Robby Turner during the last years of his life.

Jennings recorded the songs only playing his guitar and singing while accompanied by Turner on the bass. Further instrumentation was planned, but it was stopped due to Jennings’ death in 2002. Turner completed the recordings ten years later with the help of members of Jennings’ band The Waylors.

“Goin’ Down Rockin’” is the leadoff track for the album. It is probably my least favorite track in the album, mostly because I don’t like the guitar work on the cut, but even so I like the song. Swamp legend Tony Joe White assists with vocals. Waylon doesn’t appear to be in particularly good voice on this track so I assume it’s one of the last tracks recorded. In a way the song’s chorus perfectly reflects Waylon’s outlook on life:

“Belle Of The Ball” has more of a contemporary country sound, with nice steel guitar work. The song is a gentle and reflective ballad about one of the things that did go right. I don’t know if the song is specifically about his wife Jessi Colter but it would certainly fit

A vagabond dreamer, a rhymer and singer of songs
Singing to no one and nowhere to really belong
I met a beautiful lady, a pure Southern belle of the ball
Like Scarlett O’Hara, loved no one and wanted them all

There is a nice you tube video of Shooter Jennings that you can watch until the album becomes available on September 11, 2012.

“If My Harley Was Runnin'” is the lament many of us have felt – nothing in life is working (including personal relationships) and there is no way to run – but watch out because if ever he gets his Harley working as he’ll be long gone. I wasn’t that impressed with the song the first time I heard it, but it certainly has grown on me with repeated playing.

“I Do Believe” is a very reflective song taken at a slow tempo, not overtly religious but very spiritual just the same. Another song that has grown on me with repetition:

“Friends In California” and “The Ways of The World” are just decent country songs, performed well . The latter has the same tempo and pattern as one of Waylon’s biggest hits “Amanda”, a song I think you could easily sing to this melody. “Shakin’ The Blues” is a slow song. Again a decent lyric improved by the fact that Waylon is the artist singing it.

Waylon was always a master at medium fast tempo blues-rockers and “Never Say Die” is no exception. The song is on a par with any similar such songs Waylon recorded in his long and distinguished career

Well, there’s snow on the mountain, a fire down below
No place to hide, but there’s no place to go
Seems like I’m surrounded by the trouble in the air
If there’s any way out I can’t find it anywhere

I love “Wastin’ Time”, the most solidly country song of the bunch. The best county songs are about troubles, sorrows and laments and no one did them better than Ol’ Waylon

“Sad Songs And Waltzes” is an older song that I first heard on a Keith Whitley album some years ago. I very much liked Keith’s version but Waylon has more resignation in his vocals which gives the song a different flavor, so I wouldn’t want to choose between the two versions.

I’ve been married a long time so I don’t have any recent experience with barroom angels. Even so, I don’t suspect that things have changed much. Forty years ago “She Was No Good For Me” might have become a radio classic. Even if radio won’t play it today, it’s a fine song:

The album ends with “Wrong Road To Nashville” , a song which has a strong Cajun flavoring with Cajun fiddles and rhythm, and a few vocal scats lifted from “Jolie Blon”. Lyrically this song is not that strong, but it is a pleasant aural experience.

Apparently there wasn’t a great backlog of unreleased Waylon Jennings material at the time of his death, so this may be the last Waylon Jennings album of new material. If so, Waylon has exited on a very high note. Kudos to Robby Turner for the exemplary job he did in finishing off the masters in a manner befitting a legend. Kudos also to Waylon Jennings for being that legend.