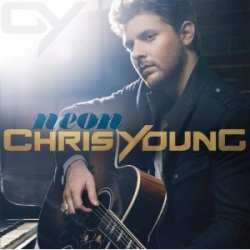 Chris Young has one of the very best voices in current country music, a burnished baritone which echoes the great vocalists of the past, which has made it frustrating that his choice of material has not always lived up to that voice and his potential.  Radio seems happy to play mediocre songs like the pedestrian ‘You’, which despite being the most boring moment on the artist’s otherwise otherwise promising third album, was his most recent #1 hit.

Happily, he has followed it up with the title track and one of the better songs from that album.  Written by Shane McAnally, Josh Osborne and Trevor Rosen, the lyric compares the beauties of nature in the American southwest unfavorably to the joys of the honky-tonk, with Chris declaring neon to be his favorite color.

Using Urban Cowboy era Johnny Lee as the jukebox artist is the most interesting choice by the writers, compared to the usual nods in a song like this to Haggard, Jones or Hank.  Perhaps the reason is that the song itself is not about dealing with (or failing to deal with) the agonised heartbreak of the best bar room laments, but a positive depiction of honky tonk life, with the bar room is made to sound exceptionally inviting as a home from home.  While it is a place to set aside one’s troubles for a while, it isn’t a way to escape life altogether.  After all, our protagonist is clearly familiar with the great outdoors and appreciates in its way, at least before dark when the lure of the neon lights is too much to resist.

The graceful melody,  traditional arrangement, and wistful-sounding vocal all elevate the song into something which is superior to the vast majority of contemporary radio fare.  It is already in the top 40, and will hopefully follow its predecessors to the top.