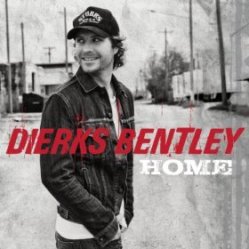 It was inevitable that Dierks Bentley’s follow-up to 2010’s Up On The Ridge would be a more radio-friendly project; I was slightly fearful that he would offer up a collection of mindless party songs in the vein of “Sideways” in order to get back in the good graces of country radio programmers.  What I didn’t expect was an album that was more mainstream while retaining many of the bluegrass-flavored elements of its predecessor.  This is likely the handiwork of Jon Randall, who produced Up On The Ridge, and who is back on board to share production duties with Luke Wooten and Dierks’ longtime producer Brett Beavers.

The similarities to Up On The Ridge are immediately apparent from the first notes of the opening track “Am I The Only One”, (reviewed by Occasional Hope last April) which reached #1 last September.   It starts off with a prominent banjo track, though the slightly too loud electric guitars take over by the time the song ends.   “Gonna Die Young” takes a similar approach, though this song works less well overall; the production is a little more heavy-handed and there is a slight hip-hop rhythm to the lyrics. “5-1-5-0” and “Heart of a Lonely Girl” both sound as though they could have been recorded during the Up On The Ridge sessions.

One of the album’s highlights is the title track and current single, which was selected as the official song of Dierks’ native Arizona’s Centennial Commission.  Written by Dierks with Brett Beavers and Dan Wilson in response to the shooting of U.S. Congresswoman Gabrielle Giffords last year, the song breaks from the rock-grass formula of the album’s first three tracks. It currently resides at #6 on Billboard’s Hot Country Songs chart. I reviewed the single back in October. Since that time, former Drive-By Truckers member Jason Isbell has accused Bentley of plagiarism, citing similarities between “Home” and his own “In a Razor Town”. Listen here and decide for yourself.

Things take a less serious turn when Dierks advises a friend who is about to get engaged, about the slippery slope he’s embarking on, in “Diamonds Make Babies.” I’d like to see this one become a single, but I’m inclined to think that the generic, play-it-safe “In My Head” will be the next track sent to radio. On the bluesy “When You Gonna Come Around”, Dierks is joined by Little Big Town’s Karen Fairchild. Though their voices blend well together, the tune itself borders on bland. As the least country-sounding track on the album, it too could be a contender for a future single release.

Dierks saves the best for last. The closing track “Thinking of You” is a beautiful acoustic number, which at just over seven minutes is too long. After an extended instrumental break, it fades out after about five and a half minutes, only to fade back in several seconds later with a verse sung by a very young child, presumably Dierks’ daughter. Some will find this precious, but I could have done without it.

Not every track is stellar. “Tip It On Back”, about finding an escape from life’s daily trials and tribulations, and “Breathe You In” are both throwaways, but overall, Bentley succeeds in creating a sound that is contemporary while deeply rooted in country and bluegrass. There is plenty here to appeal to country radio, without alienating longtime fans.