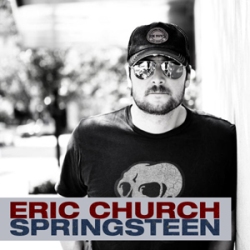 When a singer desires to prove their worth they’ll often name check a music legend in their song in hopes of drudging up a modicum of credibility. Of late, the practice has been in overdrive morphing from adoration to insolence. And it seems the songs with the most name checking often rock harder than any of the legends being cited within.

So it’s refreshing that Eric Church would co-write a song, about a legend, that smartly avoids those pitfalls. “Springsteen” is by and large one of the strongest songs currently vying for airplay because the details in the story and the choices in the production are nearly flawless.

We’ve all heard it before – the teenage couple in love and the song that binds them together for life, long past the confines of the relationship. Here that song is “Born In The USA,” Bruce Springsteen’s classic from 1984. But what makes “Springsteen” a cut above the rest is the masterful way Church and co-writers Jeff Hyde and Ryan Tyndell craft the story.

The song begins with the male protagonist thinking back on the memories drudged up whenever the magical song comes on the radio:

To this day when I hear that song

I see you standin’ there on that lawn

Somewhere between that setting sun

I’m on fire and born to run

You looked at me and I was done

And we’re, we’re just getting started

While Church does mumble the opening lines a bit too much for my taste, he makes up for his delivery by nicely setting the scene for the love affair to be fleshed out in more detail later. The second verse has the lead character running into this girl in the present day yet she doesn’t remember him that well. The writers glaze over this meeting but use it as a bridge to further develop the love story back when the characters were 17:

Back when I was gasoline

And this old tattoo had brand new ink

And we didn’t care what your mom would think

About your name on my arm

Baby is it spring or is it summer

The guitar sound or the beat of that drummer

You hear sometimes late at night

And like any well-crafted song, it isn’t just the tiny details in the lyrics (like mentioning the jeep they would ride around in) but also choices in the production that add to the overall feeling of the song. Sonically, “Springsteen” is unlike anything else on country radio right now – a little gritty and atmospheric with a steady drumbeat to help guide the story along.  When listening you get the impression that you’re hearing the work of a singer/songwriter and not just another four minutes of filler churned out by the Nashville machine. It’s that level of concentration that elevates “Springsteen” above the standard piece of nostalgia.

This may be another song about songs, but it works because the whole thing is believable. Brad Paisley’s “Old Alabama,” for instance, failed because he tried to mix novelty and tribute in his ode to Alabama. Adding in that touch of playfulness only extenuated the weaknesses in the lyrics and turned what could’ve been great, into something corny. It’s as if Church learned from the faults of that and other recent songs about songs and decided to write something truly outstanding that honored the artist being mentioned without that singer getting in the way of the song.

But you’ll see in the coming months that “Springsteen” is more than just the third single from an album, but rather a turning point in a career. It’s now that Church will begin to be taken seriously as an artist and not just as a singer. I’ve always preferred his rockish stylings to Jason Aldean – there’s an authenticity to Church you don’t get with Aldean. Like Miranda Lambert he’s a real country singer and I’m glad to see the material is finally matching the promise I’ve seen in him since I first heard Sinners Like Me seven years ago.