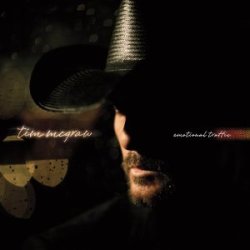 Were I unaware of the longstanding feud between Tim McGraw and Curb Records, and the resulting lawsuit surrounding the release of Emotional Traffic, I would likely be asking myself what on earth Tim was thinking when he recorded this collection. It’s difficult to imagine that he thought his fans were clamoring for an album of overproduced junk that, with only a few exceptions, is far removed from the realm of country music. One possible explanation is that it is an act of deliberate sabotage on Tim’s part, a parting shot at an unscrupulous company that went to great lengths to extend his contract term. It seems like a stretch at first, but the more I listened to the album, the more plausible the theory seems. While I do think that Curb treated McGraw shabbily, I’m slightly more sympathetic towards them after giving Emotional Traffic several spins. While Curb’s legal objections to Emotional Traffic were concerned with the timeframe in which the album was recorded, a more meritorious argument would have been that it doesn’t meet the standards of McGraw’s earlier work and that it provides them with very little usable material to promote to country radio. Make no mistake, this is one hot mess of a record.

Emotional Traffic was co-produced by Tim and Byron Gallimore, who has had a hand in producing Tim’s records since the very beginning of his career. Originally recorded in 2010, the album was shelved in favor of a redundant hits compilation and was then further delayed by the court case. One track, “Felt Good on My Lips” was released as a single in September 2010 and made it to #1. Though I’m not overly fond of the song, it does have a catchy melody, and despite its throwaway, fluffy lyrics, it’s one of three songs on the album that is at least tolerable. It was written by the Warren Brothers — who contributed four songs to the album — along with Brett Beavers and Jim Beavers. This foursome also collaborated on the rather annoying and sing-songy “Hey Now.” Tim himself shares songwriting credits along with Brett and Brad Warren and Martina McBride on “I Will Not Fall Down”, an introspective song about getting older that aims to be inspirational (“I will not fall down without getting up”), which ultimately falls flat due to the constant repetition of the title line, over-processed vocals and too-busy production.

“Touchdown Jesus”, written by Rhett Akins, Dallas Davidson, and Ben Hayslip is not a great song but it’s infinitely superior to most of the other offerings here. It has the potential to be a hit single, and I think I could get to like it more with repeated listenings, although it does degenerate into a bombastic gospel-like song towards the end.

Of the twelve tracks on this album, only one — the current single “Better Than I Used To Be” — is truly good — although, as Occasional Hope recently pointed out, it cannot compete with Sammy Kershaw’s far superior version. Nevertheless, I’m glad that someone who is still getting radio airplay decided to give it a chance. The only truly country-sounding song on the album, it is currently on the verge of cracking the Top 20 and will likely reach the higher rungs of the chart.

With the exceptions of “Better Than I Used To Be”, “Touchdown Jesus” and the mediocre “Felt Good On My Lips”, I’m afraid that I found Emotional Traffic to be quite unlistenable, and I imagine that all but the most dedicated McGraw fans will be disappointed in it. While Tim has never been one of my favorite artists, he has had a knack for picking some very good material in the past. Hopefully he has some better songs on hold for his next project once the remaining legal issues play out.