Leave a comment Posted by Occasional Hope on January 27, 2012 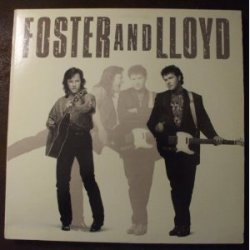 Singer songwriter Radney Foster first teamed up with fellow writer Bill Lloyd in 1986, with the duo’s debut album being released on RCA the following year. Epitomising the diversity of late 80s country radio, Texas-born Foster’s country roots mixed with Lloyd’s pop/rock influences. Foster’s distinctive hard-edged voice generally takes the lead with Lloyd adding Beatles-esque harmonies and playing various guitars and mandolin. The duo produced, and wrote all the material, most frequently together, with a handful of solo compositions tossed in.

The cheerful rockabillyish debut single ‘Crazy Over You’, which had also just been covered by another new act, Ricky Van Shelton, got the new duo off to a great start, peaking at #4 on Billboard. The melodic mid tempo ‘Sure Thing’ also did pretty well, and was their second top 10 hit, and it is pleasant listening but a bit repetitive lyrically.

The third single, ‘Texas In 1880’ (written by Radney alone) hit the roadblocks, and stalled out in the lower reaches of the top 20. It was an interesting song which deserved to do better, giving voice to a contemporary rodeo competitor who draws inspiration from his image of the “wild and free” cowboys of a past era. John Cowan of New Grass Revival sang a guest high harmony.

My favorite song on the album, the excellent ‘What Do You Want From Me This Time?’ (featuring Vince Gill on guitar) took them back to the top 10. It is extremely catchy but withou sacrificing emotional depth. The protagonist tells his ex she is out of luck in her bid to reheat a relationship which is all over as far as he’s concerned:

You say things have changed but that’s pretending
Baby, love don’t always have a happy ending

Another fine song, ‘Don’t Go Out With Him’, omitted from the LP/cassette version, was to be a hit single for Tanya Tucker and T Graham Brown in 1990 with slightly re-worked lyrics. The original works very well as a picture of unrequited affection. ‘You Can Come Cryin’ To Me’(written by Radney Foster alone) feels like a sequel to this song, as that relationship has ended in literal tears and he offers a shoulder to cry on. It is a very good song and would have fitted in well on his solo album.

‘Hard To Say No’ is a fast-paced almost punkish rocker about finding it hard to resist sexual temptation which explains why Radney Foster once described the duo as a country garage band. It’s not the kind of thing I usually like but it is surprisingly entertaining and probably went down well live. Opener ‘Turn Around’ is pleasant and potentially radio-friendly but disposable mid-tempo country rock addressed to a woman leaving. ‘The Part I Know By Heart’ is not very interesting, while Bill Lloyd’s ‘Token Of Love’ is plain boring.

This debut appeared to herald a bright future for the duo, but their flame was to burn out even more quickly than it did for the Sweethearts of the Rodeo and the O’Kanes. They were to enjoy only one more top 10 single, 1988’s Guy Clark co-write ‘Fair Shake’, the leadoff for their sophomore album Faster & Llouder. The dup disbanded in 1990 after releasing a total of three albums, partly to allow Radney Foster to embark on a solo career. His album Del Rio TX, 1959 was a modern classic and met with much deserved commercial and critical success. His solo career also later faltered, but he has continued to release critically acclaimed music often some way off the mainstream, and he plans to record a live version of the songs on Del Rio TX, 1959 this year.

If you want to investigate the duo’s music, I would recommend either this album or the compilation The Essential Foster & Lloyd, which includes the best seven tracks from this release.