Album Review: The Judds – ‘Love Can Build A Bridge’ plus later recordings 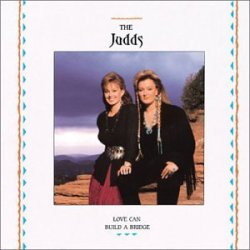 Released in September 1990, Love Can Build A Bridge saw the duo continuing their success into the new decade. A bittersweet project, it would be the last during their hit making years and was followed by the famed farewell tour in 1991. It was also the first Judds album not to feature a #1 hit.

Lead single “Born To Be Blue” opens soft with Wynonna’s distinctive twang coupled with piano accompaniment until the track kicks into high gear on the chorus. Producer Brent Maher was smart to showcase Wynonna’s bluesy vocals as they elevate this otherwise boring song and foreshadow what was to come in her solo work.

The spiritual title track, co-written by Naomi with John Barlow Jarvis and Paul Overstreet is the highlight of the album and like “Born To Be Blue” only reached a chart peak of #5. The soft and tasteful production heightens the overall message connecting us with God.

They followed with the now forgotten Don Potter, Wynonna, and Paul Kennerley co-write “One Hundred and Two” and John and Lawrence Hammond’s “John Deere Tractor.” The former managed to peak at #6 while the latter hit #29. “One Hundred and Two” features a committed vocal from Wynonna, but the uninteresting lyrics and dated production hinder my overall enjoyment of the track. The same problems sink “John Deere Tractor” which not only doesn’t measure up to the duo in the prime, but also leaves me feeling like they’re coasting on their success.

One place they aren’t coasting, though, is “Calling In The Wind,” my favorite track overall. The opening acoustic guitar work drew me in instantly and the whole thing has a fresh feel that sounds like it could’ve been recorded today.

The bluesy qualities of the funky “Rompin’ Stompin’ Bad News Blues” and “Talk About Love” plus the rambunctious “This Country’s Rockin’” perfectly showcase Wynonna’s vocals, the duo’s greatest asset. She sounds like she’s coming into her own for the first time as though she’s finally finding her own voice. These don’t have the feel of Judds hits but rather Wynonna’s solo work, which makes them sound out of place here.

They return to form when sticking to the ballads, and both “In My Dreams” and “Are the Roses Not Blooming” deliver the simple acoustic country sound the duo championed on their iconic works. The former should’ve been a single and would’ve worked in the early 90s country format. The latter makes for an extremely poignant album track.

In the years following Naomi’s retirement from country music and full recovery from Hepatitis C, the Judds reunited now and again to bring the fans fresh music. “Don’t Throw That Mojo On Me,” a track from Wynonna’s The Other Side in 1997 featured Naomi on vocals. They then reunited for a reunion concert on the eve of the millennium, which became a two-disc album. While the concert as a whole is an enjoyable listen, there isn’t much by way memorable moments if you don’t already own it. But I did enjoy Ashley’s speech before the launch of “Love Can Build A Bridge” relaying her memories of the farewell show and what it was like to sit in the audience that night. 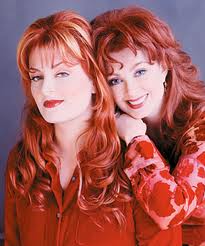 Two years later they gave the fans four new songs on an EP entitled Big Bang Boogie, available as a bonus disc on initial pressings of Wynonna’s New Day Dawning album. The lead and only single, “Stuck On Love” peaked at #26 and became their first charting single since “John Deere Tractor” a full ten years prior.

Big Bang Boogie marked a turning point for the duo. It began their trend of recording upbeat and somewhat silly songs way beneath their caliber. Tracks like “The 90s Were The 60s Turned Upside Down” complete with a synthesizer in the opening are a far cry from “Mama He’s Crazy.” Even the lone ballad, “That’s What Makes You Strong” has a strange 80s pop vibe that doesn’t gel.

After the extremely disappointing Big Bang Boogie, it was a welcomed relief when they came back with “Flies On The Butter (You Can’t Go Home Again)” in 2003. Featured on Wynonna’s excellent What The World Needs Now Is Love album, the song quickly reestablished my faith in their music. An acoustic country ballad co-written by Chuck Cannon, Austin Cunningham, and Allen Shamblin, it not only harkened back to the sound that made them famous, but told a relatable tale of small-town family life. Originally recorded by Lari White on her Stepping Stone album in 1998, the song found its home with Wynonna and Naomi. As usual with anything of excellent caliber country radio ignored it and criminally let it die at a dismal #33.

In the following years new Judds music would be scarce until they came back to the spotlight with “I Will Stand By You” in 2010. A new single in conjunction with their anniversary and second farewell tour, it continued in the Big Bang Boogie tradition and died a quick death.  While Wynonna, as usual, turns in a strong vocal, the overall track is a mess of poppy production and trite lyrics.

But in true Judds fashion, they came out on top releasing the so-under-the-radar-you-surely-missed-it “Back Home,” a gorgeous duet with Alison Krauss. Different from anything the duo has ever done, the track opens with Krauss’s pitch-perfect vocal and some tastefully done guitar strumming. It’s hard to imagine marrying the lightness of Krauss’s voice with the deep heaviness of Wynonna’s, but the combination is perfection. It’s a must download for anyone who hasn’t heard it.

Love Can Build A Bridge: B-

Flies On The Butter (You Can’t Go Home Again): A+

4 responses to “Album Review: The Judds – ‘Love Can Build A Bridge’ plus later recordings”