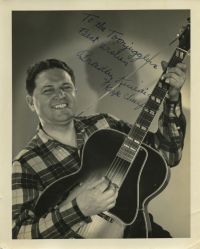 In a manner similar to Alan Lomax, William Bradley “The Kentucky Mountain Boy” Kincaid was one of the great American musicologists and collectors of American folk, country and parlor songs, and helped preserve a rich heritage through publication of his songbooks. Unlike Lomax, however, Kincaid was also a top-flight songwriter and performer.

Unfortunately, if Kincaid is remembered at all today, it is usually as the man who tagged Louis Marshall Jones with the nickname of “Grandpa,” the name by which one of the most beloved country performers, Grandpa Jones, would be known throughout his life. Grandpa continued to perform Kincaid’s songs throughout his life with songs such as “Gooseberry Pie” and “What Will I Do With The Baby-O” remaining favorites of audiences everywhere.

Bradley Kincaid was born in Point Level, Garrard County, Kentucky, but would come to prominence through radio appearances in Chicago, starting with his first radio appearance on the National Barn Dance on WLS in 1926. Kincaid stayed at WLS for four years, performing folk and country songs with his most requested song being “Barbara Allen.” This song inspired Kincaid to name his first two children, twin daughters, Barbara and Allyne. Kincaid was so popular as a performer that he annually received over 100,000 fan letters during his time at WLS. While working for the station, Kincaid would use his radio shows as the launching pad for his live appearances, making appearances in the general broadcast area of the station–a pattern that would continue throughout his radio days.

From WLS, Kincaid moved to WLW in Cincinnati, receiving 50,000 letters during his first month there. By 1935 Kincaid was at WBZ and while in the Northeast, he teamed up with the man he dubbed Grandpa Jones. He continued performing at radio stations for many years, usually moving on after a year or two. The stations he performed for were KDKA (Pittsburgh), WGY (Schenectady), WEAF (New York City) and WBZ (Boston). After ten years in the northeastern US, Kincaid moved to Nashville in 1945 where he appeared occasionally on the Grand Ole Opry, but mostly hosted his own radio show before the Opry, a show that bridged the gap between folk and country music. The esteemed Barry Mazor had this to say about Kincaid:

“In effect, he’s one of the fathers of commercial folk music, with an in-between style that also affected country. He’s one of the vocal influences behind Mac Wiseman, for instance.”

Kincaid’s work in radio enabled him to publish songbooks, probably the most important of his accomplishments.  In 1928, Kincaid published his first songbook titled My Favorite Mountain Ballads. The initial printing sold more than 100,000 copies and subsequent printings brought the sales totals to over 400,000. Over the course of the next twenty years, Kincaid would publish a total of thirteen different songbooks.

Kincaid’s career as a recording artist started in 1927 for Gennett Records and over the course of the next 23 years, he recorded steadily for a variety of labels. Later on, Kincaid re-recorded some of his songs for labels such as Blue Bonnet and Old Homestead during the 1960s and 1970s.

The Billboard Country Music Charts started on January 1, 1944 by which time Kincaid was already 48 years old. His music hearkened back to an older tradition, anyway, so even were he younger than that age, it’s unlikely he would have been a charting artist in the 1940s. During the late 1920s and 1930s, however, Kincaid was very popular live performer and his records sold well.

His most successful record may have been “Letter Edged in Black,” which he recorded for RCA in 1934. It was the recording from which Jim Reeves learned the song for his successful recording about 25 years later. Kincaid’s best known songs as a songwriter were “The Death of Jimmie Rodgers,” “The Life of Jimmie Rodgers,” “Captain Bill,” and “The Legend of the Robin’s Red Breast.”

A careful businessman, Kincaid largely retired from performing in 1950, making occasional appearances at music festivals. In 1971, he was inducted into the Nashville Songwriters Hall of Fame. He turned over his musical archives to Berea College in Berea, Kentucky where they remain to this day.

The Ernest Tubb Record shop usually has some of Bradley Kincaid’s CDs available for sale – currently there are two twenty song collections on Old Homestead, consisting of songs that he recorded in the 1960s. Between them the two discs Mountain Ballads & Old-Time Songs and Favorite Old-Time Songs Vol. 2 contain most of his popular songs, although neither contains a recording of “Letter Edged In Black”.

Beyond that you’ll need to do some digging to find his recordings. For more about Bradley Kincaid, there are two books which can help fill in the gaps: Everybody’s Grandpa by Grandpa Jones (an entertaining and often hilarious book) and Radio’s ‘Kentucky Mountain Boy’ Bradley Kincaid by Loyal Jones, who was with the Appalachian Center at Berea College.

The following blog has posted some Bradley Kincaid music for your listening enjoyment: http://allensarchiveofearlyoldcountrymusic.blogspot.com/