Single Review: Tim McGraw – ‘Better Than I Used To Be’ 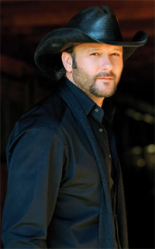 Even if you’re not a Tim McGraw fan you’ll probably feel happy that a Nashville court has just set him free from his contract with Curb Records, at least pending a further hearing next summer. Feelings may be more mixed about the fact that, quite shamelessly, Curb has immediately released a new McGraw single, apparently in an attempt to wring the last possible drop of profit from their almost-20-year involvement with his career. It remains to be seen whether they will actually try to push this seriously at radio – or indeed release McGraw’s shelved Emotional Traffic album from which this presumably comes.

The song is a very good one, written by Brian Simpson and Ashley Gorley, and I was impressed by it when I first heard it last year, as the title track of Sammy Kershaw’s most recent album. The comparison is unfortunate, as Sammy Kershaw is far superior as a vocalist. Tim’s interpretation is broadly similar, with a thoughtful, subdued opening which works extremely well, although later on he lacks the tenderness and subtlety of the original.

The production is more effective than the rock-influenced sound of much of Tim’s last album, particularly the piano-led beginning but it compares even more unfavorably than the vocal does with Kershaw’s more scaled back version. The opening is very similar, but like the vocal it gets a little bombastic, with too much going on. Lyrically, the song’s message of regret for past behavior and determination to change is an interesting choice given the ongoing dispute between Tim and Curb.

If you missed Sammy Kershaw’s version, check that out first. But this is still a decent performance of an excellent song which deserved to be a hit last time around, and it’s a shame its reception is likely to be overshadowed by comment on the ethical behavior of Curb Records.

10 responses to “Single Review: Tim McGraw – ‘Better Than I Used To Be’”