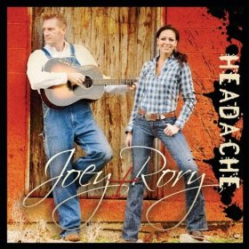 It’s always good to hear new music from Joey + Rory. Not only do they have a Christmas album due this year, but here is a brand new single and video, hopefully heralding another non-seasonal album in the not-too distant future.

Better still, this particular track is absolutely delightful, playing off the couple’s well-known real-life relationship. A wife has her husband’s weekend chores all planned out, and is less than pleased to see that his plans involve a fishing trip with friends. But she has a subtle revenge in mind for being left high and dry:

His birthday treat is also at risk, and as her wrath grows, her “headache” extends to a threatened month, and finally:

Eventually, the force of this threat persuades him to give in and relinquish the fishing trip in favour of his love life.

Joey’s lovely voice is at its best, with Rory contributing muted chorus harmonies, although he does play a bigger role as the erring husband in the equally charming video (directed by Bryan Allen), which playfully depicts the song’s story, intercut with performance scenes displaying the couple’s evident chemistry. The one thing I could have done without in the video are the line dancers, who really don’t add anything.

The song is neatly constructed and set to a bright mid-tempo tune. The arrangement and production are clean and crisp, and pure country, as we have come to expect from the pair’s music.

I was saddened to see they hadn’t made it to the shortlist for the CMA’s Duo of the Year this year, but in all honesty, Play the Song and its singles haven’t made as many waves as they deserved to do, and their label Sugar Hill does not have the clout of the majors. They are, however, the best duo in country music at the moment. Joey’s vocals carry the weight of the single, but Rory’s presence, and their interaction, add a genuine sweetness which is their trademark.

Watch the video on CMT.