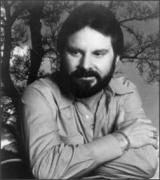 Moe Bandy. If ever there was a name appropriate for a country singer, a western singer or a rodeo rider, Moe Bandy would be it. Moreover, Moe would fit all three categories and was elected to the Texas Rodeo Hall of Fame in 2007.

Emerging during a time when the “Nashville Sound”, the dominant sound of the prior decade and a half, was on the decline and the so-called “Outlaw” movement was on the rise, somehow, Moe Bandy would emerge on GRC records sliding through the cracks to produce some of the finest hard-core country music of its time, music with true honky-tonk heart and soul. After a few albums Moe would leave GRT and sign with giant label Columbia and the Nashville establishment would eventually absorb his music back into the mainstream, but before it did, he produced some of the most glorious country music imaginable

Marion Franklin Bandy, Jr.was born on February 12, 1944 in Meridian, Mississippi, the hometown of the legendary “Blue Yodeller” Jimmie Rodgers. The nickname Moe was given to him by his father. Moe’s grandfather, like Jimmie Rodgers, was a railroad man who, at one time, was reputed to him been Jimmie Rodger’ boss in the railway yard in Meridian. When Moe was only six years old, his family moved to San Antonio, Texas. His mother played piano and sang and his father played the guitar by his father.

As a teen Moe occasionally played with his father’s country band, the Mission City Playboys, but Moe didn’t turn to music professionally until first trying his hand at rodeo – by the age of 16, he was competing in rodeos all over Texas. After a few years of bumps and bruises, Moe’s better sense prevailed and he turned to music for a living working some nights with his father’s band and some nights at whatever venues he could arrange while working days doing sheet metal work. During the early 1970s he formed a group called Moe and the Mavericks.

In 1972 Moe caught his big break when some demos he had recorded came to the attention of record producer Ray Baker. In 1973 Ray suggested that Moe come to Nashville. Bandy scraped together the money for a recording session and recorded a song called “I Just Started Hatin’ Cheatin’ Songs Today”. Initially released on Footprint Records, the record came to the attention of larger independent GRC which was based in Atlanta. In March 1974, it entered the US country charts, eventually peaking at #17 on Billboard and #6 on Cashbox . Four more hits followed: “Honky Tonk Amnesia” (#24 BB / #20 CB), “It Was Always So Easy To Find An Unhappy Woman” (#7BB & CB), “Don’t Anyone Make Love At Home Anymore” (#13 BB / #11 CB), and the Lefty Frizzell-penned “Bandy The Rodeo Clown” (#7 BB #2 CB).

Moe Bandy would release three albums on GRC, I Just Started Hating Cheatin’ Songs Today, It Was Always So Easy (To Find An Unhappy Woman) and Bandy The Rodeo Clown, all filled with strong lyrics and simple arrangements of hard-core honky-tonk music. When first released, they made everything else being released at the time, including the “back to the basic” outlaw music of Waylon and Willie, seem overproduced in comparison.

With as much success as Moe was having with GRC, it was inevitable that a major label would eventually hook up with Moe, and in 1975 Moe Bandy landed on Columbia. The first few albums retained the hard-core sound but as time passed Moe and his producer Ray Baker softened up Moe’s sound somewhat, although it would remain reasonably honky-tonk during the entirety of the Columbia years. Since Columbia purchased Moe’s GRC recordings, the first hit collection released on Columbia , 1977’s The Best of Moe Bandy was mostly GRC material.

Moe’s first Columbia single “Hank Williams, You Wrote My Life” featured the song titles to many of Hank’s hits and reached #2 BB and CB in early 1976. A string of top 15 singles followed including a memorable recording of the Hank Williams-penned “I’m Sorry For You My Friend”, “Here I Am Drunk Again” and “Cowboys Ain’t Supposed To Cry”. The first chart topper came in early 1979 when Moe’s recording of “It’s A Cheating Situation” reached #1 on Record World (#2 BB & CB). Although not billed as a duet, Janie Fricke sang very prominent backing vocals on the record.

The first Billboard #1 would come later that same year when “I Cheated Me Right Out of You” reached the top. That same year Moe found himself paired with quasi-labelmate Joe Stampley (Stampley was on Epic) for a series of ‘good ol’ boy’ duets. The first one “Just Good Ol’ Boys” would reach #1 on Billboard (#2 CB) and be the biggest hit of the duets.

1979 was the high water mark of Moe Bandy’s career. Moe would continue to chart records during the 1980s, although by 1985 the chart placings were mostly outside the top thirty. A label switch to MCA/Curb in 1986 saw two last top ten records in the 1987 hit “Til I’m Too Old To Die Young” and 1988’s “Americana”, but both of these records were far removed from the hard-core honky-tonk sound that made Moe Bandy one of my favorite artists of the 1970s. Moe’s last chart placing was with his cover of the Michael Johnson pop hit “This Night Won’t Last Forever, which nudged into the top fifty at #49.

All told Moe Bandy charted 40 singles as a solo artist, duets with Judy Bailey and Becky Hobbs, plus nine Moe & Joe singles. Excluding the Moe & Joe singles, according to Billboard, Moe had 16 top ten single plus another 14 that placed between #1 and #20. As part of Moe & Joe, Moe had six top twenty singles, with three reaching the top ten.

Moe Bandy is still actively performing . For a number of years, starting in 1991, he had his own theatre in Branson. Although he eventually sold his theatre, he still appears there on occasion, usually at the Jim Stafford Theatre. A detailed tour schedule can be found at http://www.moebandy.com/

VINYL
As always, these albums are out-of print. Moe recorded three albums for GRC in 1974-1975 and seventeen solo albums for Columbia from 1976-1986 (this does not count hit compilations and the Joe Stampley duet albums. All of these albums are worth the trouble to hunt down, especially the albums from before 1980.

Since leaving Columbia in 1986 Moe has recorded vinyl (and/or cassettes) for MCA/Curb, Curb and Warwick. While all of these albums have their moments, none of them are as consistently good as the GRC and Columbia albums

Moe has some CDs available at http://www.moebandy.com ; however, I do not know the vintage of any of the recordings offered for sale at this site

The Ernest Tubb Record Shop has a three CD set with 32 songs titled All-Time Greatest Hits . I think these are re-makes, but I am not certain of this. Another title available there is Barstool Mountain, on the Razor and Tie label – this one I own and it is chock full of GRC and Columbia original recordings – twenty of Moe’s best recordings.

There are other CDs available, both at the Ernest Tubb Record Shop and at Collectors Choice Music – if on the Curb label, it will contain MCA and Curb recordings, if on the Columbia, CBS, or Sony labels, it will contain GRC or Columbia recordings. Other labels will contain recordings of uncertain vintage. In the past several British and/or German labels have issued some original GRC and Columbia Moe Bandy recordings so be on the lookout for such recordings. I don’t recall which label issued them, but if you see recordings on Hux, Ace, BGO, WestSide or Bear Family, they will be the original recordings.

The Moe & Joe collaboration is also available on CD – several titles – mostly all novelties songs. A little goes a long way for the ‘good ol’ boys’ schtick so if you want some of this music, find a hits collection – that is all you will really need.