The longest and worst Trace Adkins album ever: a concert review 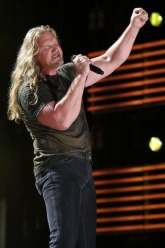 Last Thursday, my friend Rhonda (hi Rhonda!) invited me to go to the Ohio State Fair with her, emphasizing that she also had tickets for the evening’s Trace Adkins show.  I like Rhonda a lot, and summertime fairs almost as much, so along I went even knowing who the show’s opener was. That particular night’s Trace Adkins tour stop at the Celeste Center in Columbus began with country-rapper (yes, that’s really a thing now) Brantley Giblert. After enduring Gilbert’s set, and the insufferable people around me who had convinced themselves we were hearing quality music, where the pseudo southern rock star sonically roared through his own compositions, including those Jason Aldean has taken to the top of the charts, it was finally time for the headliner to grace the stage. After every song Gilbert offered turned out to be, unsurprisingly, a fist-pumping anthem, I was more than ready to hear Adkins’ baritone tackle some of his better numbers. And while he finally did get around to playing a butcher’s handful of his more meaningful tunes, Adkins began his 70-minute set with a whole slew of his own brand of rock-your-socks country.

From “One Hot Mama”, “Marry For Money”, “Chrome”, through “Brown Chicken Brown Cow”, Adkins trotted out his arsenal of bawdy hits early and employed a large screen to play the music video for each. All but “Brown Chicken” featured an appearance by a bikini babe, in it puppets play the farm-couple porn stars. This apparently wasn’t lost on Adkins, as he remarked that his mother doesn’t like his music videos very much, and ended the shtick with his own Goofy guffaw. He would repeat this throaty hiccuping chuckle each time he tickled himself from the stage, which was often. He also offered up several tunes from his just-released Proud To Be Here album –  the catchy “Million Dollar View” sounds like the next single to me.  Midway through his own list of radio favorites came one of the night’s best performances in the form of a cover of rock band Ace’s 1975 hit “How Long”. During this number, he removed his hat and allowed his two-foot locks to flow and began headbanging to the song’s mid-tempo groove. Even though the night’s high marks were when he delivered lasting favorites “Every Light In The House Is On” and “Then They Do”, the only other of his ballads performed was his current single “Just Fishin'”. This was my first seeing either artist in concert, and even though Trace brought his best affable swagger to the stage, I walked away feeling like I’d just heard a really long version of the singer’s worst album.  When he finally played what I already figured would be the closing number, “Honky Tonk Badonkadonk” never sounded better.

11 responses to “The longest and worst Trace Adkins album ever: a concert review”