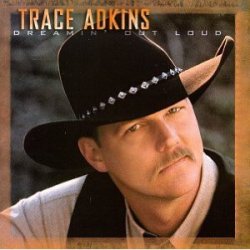 Released in June 1996, Dreamin’ Out Loud began a career now going fifteen years strong. Debut albums are usually regarded as safe efforts meant to make a good first impression with radio programmers and at retail, but even at the start of his career Adkins was able to let his personality shine through in his music and prove he’s a formable talent. Dreamin’ Out Loud went platinum and scored three consecutive top ten singles including Adkins’s first number one hit “(This Ain’t No) Thinkin’ Thing.”

I chose to review this album because of my love for 90s country and my high regard for country music released in 1996, the year I began taking the genre seriously (at all of nine years old). The music videos for “Every Light In The House” and “(This Ain’t) No Thinkin’ Thing” will always hold fond memories for me as pieces of my childhood.

As for singles, Capitol Records led with “There’s A Girl In Texas,” arguably the least known of any of Adkins’s hits. It was a safe choice for the first single and peaked at number 20.  Like his latest single, “Just Fishin,” “Texas” is the kind of song Adkins excels at – a simple story told without any distracting frills. I’ve always enjoyed the gentle groove of the arrangement – light drums mixed with flourishes of steel guitar. Even though the song isn’t all that special lyrically, Adkins pulls it off quite well.

The second single, “Every Light In The House” not only put Adkins into the upper reaches of the singles chart for the first time, but used an interesting concept to sell the story of a man waiting for his woman to come back home. Instead of merely moping around the house, he turns on every light in hopes she’ll be guided back to him. A piece of nostalgia from my childhood, “Every Light In The House” remains one of my favorite singles Adkins has ever released. I’ve always enjoyed “ House’s” traditional arrangement, which complements the lyrics and Adkins’s voice quite well. But it’s Adkins’s conviction that sells the song for me – You can hear the ache in his voice as he longs for the woman he loves.

Adkins and the label followed it up with the most polarizing song from the album. “Thinkin’ Thing” helped to define country music when it was released in 1997. Sounding nothing like what was playing on country radio at the time, it’s the best indicator he’d travel down this lane frequently with hits like “I Got My Game On,” “Marry for Money,” and “Honky-Tonk Badonkadonk.” But in comparison, it’s his best single in this vein – a sexy contemporary country thumper that expertly uses steel guitar to ground it in the genre. Plus, the “Right Brain/Left Brain” lyric, which was always a tad idiotic, is among the most memorable of any he’s put on record to date.   And the sexy video showcased another side of Adkins as she showed off his dancing, more like grooving, for the first time.

The fourth and final single, “I Left Something Turned On At Home” is the only one of the singles not to age well over time. The kooky concept and double entendre title make this the kind of song you enjoy the first time you hear it but grow to hate as it gets played over and over at radio. A #2 peaking single in 1997, “Home” makes good use of the mid-90s formula to prominently feature fiddles in your songs. It’s nice to hear Adkins sounding country here and I have to give him and producer Scott Hendricks credit for not over doing the musical accompaniment. I like the use of piano and fiddle here – lyrically this track may be a mess, but it is catchy. Even today when I hear it on the radio, I stop and listen. Plus, seeing as I was ten at the time of its release, the song proved a good educational tool regarding its sexual subject matter. Leave it to good ‘ole country music to teach me about adult subjects at such a young age.

As for the rest of the album, Adkins and Hendricks filled the project with safe ballads and a couple throwaway pieces of filler that might have sounded good back then, but take on far too many of the characteristics of the era. Ballads like “A Bad Way of Saying Goodbye,” “I Can Only Love You Like A Man,” “It Was You” and the title track display Adkins’s fine chops at traditional country, a road he needs to travel down more often for me. He’s at his best when backed up by fiddle and steel guitar like he is here. I wouldn’t categorize these songs as remarkable, but they’re far better album tracks than most on country records today. The biggest problem is they all blend together and it’s hard to tell them apart after you’ve listened to the album. I’d like to have seen a bit more variation among the ballads.

But when he does change it up, the results are less than stellar. The foolish “634-5789” details the story of a man who gives out his phone number in hopes of giving a girl the love she’s been missing. I will say it easily becomes stuck in your head, but that’s about all it has going for it. The cheesy arrangement of drums and fiddles doesn’t work in this case because it only makes the song sound formulaic; an excuse to pander to what was popular at the time. Which means it lacks all originality and stands only to fill out a ten-track album.

The only exception is, “If I Fall (You’re Going With Me)” a song eerily similar to “If I Fall You’re Going Down With Me,” a Matraca Berg co-write the Dixie Chicks took into the top 5 in 2001. When the Chicks song came out, I had remembered Adkins had this ditty and wondered if they were one in the same. Alas they weren’t, and of course, the Chicks’ song was better. There isn’t anything wrong with Adkins’s “If I Fall.” The more I listen to it, the more it stands out as the best of the “filler” songs. It has a nice honky-tonk groove and while it also toes the popular trends at the time, it does so in a way that doesn’t seem too dated today.

In the end, Dreamin’ Out Loud is a solid first impression by a country singer who’s among the last of his generation to still be going strong at radio. The four best and most memorable songs on the album were released as singles with “Every Light In The House” standing as a classic from its time period. While I wish the second half of the project featured more variation sonically, the ten tracks came together to showcase the arrival of a fine new country singer with a bright future.

The album is widely available from both Amazon and iTunes.