Single Review – Thompson Square – ‘I Got You’ 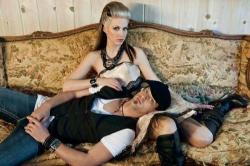 “I Got You,” the follow-up to their monster hit “Are You Gonna Kiss Me or Not,” finds Thompson Square firmly within the rock infused sound that has taken over mainstream country in recent years.  I’ve often compared their production with Jason Aldean’s, and it’s fitting to see both acts will be touring together this summer.

With “Kiss,” they proved themselves a formable talent. It was memorable enough to catch people’s attention, and once it caught on five months after it was released, it blew up like gangbusters.

Largely benefiting from the success of “Kiss,” they’re able to garner the airplay, but “I Got You” is a dip in quality from their previous hit. The main problem is the predictability of the verses.  The build up to the chorus is an obvious mix of pairings leading up to them declaring they have each other. It isn’t an interesting concept and it leads to a weak execution.

The other issue is the production, which fights the vocals opposed to complementing them. The heavy guitars and loud drums are distracting to the listener and lessen whatever charm they were going for here.

But I will give them credit for showcasing Shawna’s voice on the second verse. She has strong vocals and sounds like a less twangy Kellie Pickler. Much like when Lady Antebellum first showcased Hillary on “Looking For A Good Time,” the song benefits from hearing both sing lead.

And the song is radio-friendly and stands to further their careers down the path to major success. “I Got You” does its job of catching your attention when it comes on the radio and despite it shortcomings, the fans will likely push it into the top ten.

5 responses to “Single Review – Thompson Square – ‘I Got You’”