All about the image? 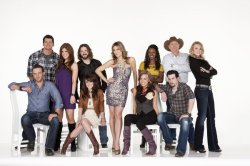 The latest episode of CMT’s current reality competition, CMT’s Next Superstar, which you can catch up with on the CMT website if you havent been watching the show live, focussed on image. Viewers saw the five surviving competitors each getting a makeover and doing a photo shoot for an album, as well as recording a classic song, before selling themselves to staff at Warner Music, whose votes counted towards that week’s elimination. Image seems to be increasingly important in marketing country music today, and has been ever since music videos became a major way of selling artists.

While an artist’s looks and fashion choices have nothing to do with the quality of their music, they do help to form the general public’s expectations, particularly for a new artist. If New Singer X is pictured wearing jeans and a cowboy hat, I do expect to hear something different from what I expect to hear from New Singer Y, whose outfit is indistinguishable from his/her pop star counterparts.

Modern traditionalists like Alan Jackson and George Strait may seem to pay little attention to image matters, but their style is as (or more) effective in it its way by signalling to the audience that here is an unquestionably country singer. The neo-traditional wave of the early 90s fizzled out in a sea of “Hat Acts”, many of them fine artists in their own right, but they tended to merge into one to many listeners when they shared a similar look and musical style. Chris Young, one of the brightest young traditionalists, often wears that cowboy hat, although Strait-style Easton Corbin does not. Compare him to, say, Jimmy Wayne or the men in Lady Antebellum, who have a much more “fashionable” appearance – and a much less country sound. Of course, it can be misleading; other cowboy hat wearers include rocker Jason Aldean. Sometimes the cowboy hat is a visual equivalent of singing lyrics about how country you are, without necessarily being supported by the music. In the 90s, Marty Stuart was making energetic country rock, but was keenly carrying on country traditions by wearing Nudie style outfits reminiscent of veterans like Porter Wagoner. It was only later that he returned to more traditional musical styles.

Nudie’s elaborate bejewelled and embroidered outfits were almost a uniform for the biggest country stars of the 1950s and 60s, even though they were a world removed from their poverty-stricken rural roots. Porter Wagoner is perhaps the most famous wearer, but even Hank Williams, whose heart wrenching music might seem far removed from image considerations, famously wore a Nudie suit adorned with musical notations. When Gram Parsons encouraged the Byrds to venture into country music with the seminal country-rock album Sweetheart Of the Rodeo, he wore a custom-made Nudie suit with designs of marijuana leaves – combining an appeal to rebellious 60s teenagers with the “country star” outfit. But for most of their wearers, the outfits symbolized showmanship and stardom, just as Loretta Lynn always wore evening gowns on stage and most of her album covers. Using an identifiable image as shorthand to signal an artist as country is thus nothing new. The young Patsy Cline wore western-style dresses, and had to be persuaded to dress in a more sophisticated way when her music began to adopt more pop influences. Dolly Parton’s highly artificial image helped to make her an international superstar in the 70s and 80s, and is still instantly recognised today across the world, even among those who have heard little of her music. In contrast, when last month’s Spotlight Artist Emmylou Harris started her solo career after Gram Parsons’ death, she looked more like the folk singer she had been as a girl, with her long hair hanging down unadorned, whereas most of her contemporaries had big hair – often wigs.

Record labels invest money in artwork for CDs, in order to attract attention on store shelves. It’s never made much of a difference to me, and I would assume not to most passionate fans who spend a lot of time listening to the music, but it may help bring in more casual purchasers. I’m almost embarrassed to admit it, but my own brother once asked for a record for Christmas, purely because he liked the picture on the cover and was intrigued to see how the music reflected it. Going back to CMT’s Next Superstar, one young female contestant was quite rightly criticized for picking a picture of herself smiling for the title ‘Cold Cold Heart’, just because she thought it made her look prettier than other pictures from the photo-shoot. Songwriter Wynn Varble, who is 50 years old and not exactly competing for heart-throb of the year, went for a simple honest look which would tell any potential purchaser that this was a country record.

Changing musical styles can also be flagged by a changing image. When Lee Ann Womack moved in a poppier direction in the early 200s, she took on a more overtly sexy look (left); then when she defiantly reverted to a retro style in 2005 with There’s More Where That Came From, she went for an equally retro 70s country album cover style (right). The music is, of course, what really matters, but the image helps signal the direction. Similarly, Reba progressed from traditional country and a semi-cowgirl look in the 1980s to a much more sophisticated style, both aurally and visually, in the 90s.

How much does an artist’s image affect what you expect to hear? Have you ever been surprised – pleasantly or otherwise – by a disconnect between the album cover and the music inside?

3 responses to “All about the image?”