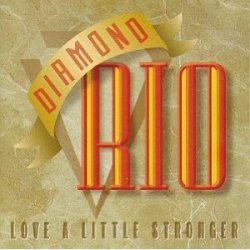 The success of Diamond Rio’s first album caused the band to return to the studio to record the follow-up a little sooner than they would have liked. By their own admission, Close To The Edge was a somewhat rushed affair, though I thought it was an enjoyable album. It achieved gold status, but that was considered somewhat of a failure in the early 90s, especially after following a platinum debut. As a result, the band took more time in recording their third album, Love A Little Stronger, which was released in July 1994, nearly two years after Close To The Edge’s release.

Love A Little Stronger was produced by Tim DuBois and Monty Powell, as Diamond Rio’s first two albums had been. This time, however, they were joined by another co-producer, Mike Clute. The title track was the first single released, and it was also the album’s biggest hit, peaking at #2. It was the band’s first trip into the Top 10 since the previous year’s “Oh Me, Oh My Sweet Baby” topped out at #5. Written by Chuck Jones, Billy Crittenden and Gregory Swint, “Love A Little Stronger” has a slightly more polished sound than the band’s previous work. The second single, a cover of Dennis Linde’s “Night Is Falling In My Heart” — one of my favorite Diamond Rio songs — also has some glossy production but it also allows the band to show off their impressive harmony skills. It reached #9 on the Billboard country singles chart.

Love A Little Stronger followed Close To The Edge’s pattern of producing two top ten hits followed by two lower-charting singles. “Bubba Hyde”, a somewhat hokey semi-novelty song about a straight-laced guy who undergoes a personality transformation on Friday nights, only made it to #16, while the excellent “Finish What We Started”, written by producer Monty Powell with Mike Noble, stalled out at #19. This one definitely deserved to chart higher.

The collection also includes some very good album cuts, such as “Into The Wild Blue Yonder”, which I would have released as a single in lieu of “Bubba Hyde”. “Into The Wild Blue Yonder” seems tailor-made for radio, but was perhaps overlooked because it was felt that radio would be more receptive to a more uptempo tune. “Gone Out Of My Mind” is one of those songs that has been recorded a number of times without ever becoming a big hit. It had previously been included as an album cut on Steve Wariner’s 1989 album I Am Ready. I still consider Doug Stone’s 1998 rendition to be the definitive version, but Diamond Rio’s take is quite good as well. “Appalachian Dream” follows the precedent established by Diamond Rio’s previous two albums, of including one instrumental track to allow the band to show off their picking skills. The album closes with the somewhat somber but quite enjoyable “Kentucky Mine”.

I’ve always been a casual Diamond Rio fan, and didn’t pay much attention to the band in the 90s, aside from what I heard from them on the radio. But as is often the case, the radio hits don’t tell the whole story. Love A Little Stronger is a solid collection, with no weak tracks aside from “Bubba Hyde”. Like the band’s eponymous debut album, it reached #13 on the Billboard Top Country Albums chart and earned platinum certification. It is still easy to find from vendors such as Amazon at reasonable prices.