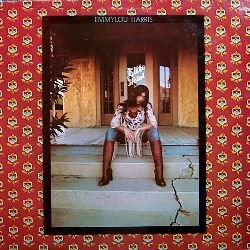 The success of Pieces of the Sky sent Emmylou Harris from relative unknown folk-rocker to A-list country star.  Still, the texture of her second album remained the same hodgepodge of rock covers, country classics, and original songs that had served Harris so well on her debut. Elite Hotel brought many firsts in Harris’ career, including her first Grammy for Best Female Country Vocal Performance in 1976, her first #1 album, and first #1 single in ‘Together Again’. Elite Hotel, like its predecessor would be certified gold. Adding to her precious metal collection, Harris collected her first gold single with ‘Together Again’.

‘Together Again’ is a cover of Buck Owens’ chart-topper. Owens version was an originally a B-side to his ‘My Heart Skips a Beat’. ‘Together Again’ topped the charts for Buck in 1964 – replacing the A-side on the charts – and by April 1976, became the first of six number-ones for Emmylou Harris. Celebrating the song’s charting power, Owens and Harris recorded a duet, ‘Play Together Again, Again’, a few years later.  Emmylou offers a similar melancholy take, imbuing the tear-soaked lyric with an understated sadness.  Hot Band member Glen D. Hardin provides an elegant honky tonk piano arrangement against the crying pedal steel of Hank DeVito, leaving the track timeless.

At radio, the album spawned another top 5 and a second #1.  The mostly acoustic ‘One of These Days’, with its sweet ode to wanderlust, features a winning dobro solo, and landed at #3 as the second single.  A cover of Don Gibson’s many-times-a-hit ‘Sweet Dreams’ gave Harris her second #1, and while technically proficient, I find Emmylou’s live recording, like so many others, bland compared to Patsy Cline’s definitive take on the song.  The eclectic blend of quality material on her albums reflect that Harris has always taken the album approach to record-making as opposed to the singles practice.  Here, she ably mixes rock with classic country, approaching each track with a traditional or acoustic touch.

Her work with Gram Parsons is more prevalent on Elite Hotel than ever before.  She offers a somber take on The Flying Burrito Brothers’ ‘Sin City’, slowing the track down a full beat.  Johnathan Edwards provides harmony on a traditional country version of ‘Wheels’, with a driving steel guitar track.  Edwards later released two albums on Warner Brothers, both produced by Brian Ahern.  ‘Ooh Las Vegas’, from Parsons’ posthumous Grevious Angel album, gets a smoking bluegrass arrangement.

Rodney Crowell’s exquisite ‘Til I Gain Control Again’ anchors the original material included here, and also provides the best showcase for Emmylou’s interpretive abilities.  The vulnerable confessional of the lyrics are never conveyed better, through countless covers, than on this string and steel mesh of goodness.  Crowell also co-wrote the only Harris contribution to the album, the tongue-in-cheek ‘Amarillo’, with its raw roadhouse sound.

Continuing to show off the versatility of herself and her famed Hot Band, Harris offers The Beatles’ ‘Here There and Everywhere’.  Here, the song is complimented by a hushed string section and the sparing use of an electric guitar. It too charted on the country singles chart as the B-side to ‘Together Again’. But more notably, ‘Here’ hit the top 5 of the Canadian Adult Contemporary chart, and it found a home inside the U.K. Top 40.  Likewise, a swinging jaunt into Hank Williams’ ‘Jambalaya’ is greeted with the vocal verve the singer brings to each track, and each musician is allowed a chance to shine on this one.

Elite Hotel proved Emmylou Harris’ most success album to date commercially, and ignited her hot streak at country radio.  But most importantly, it provided a showcase for the team of crack musicians she had assembled and for her own lofty artist visions.

Buy it at amazon.