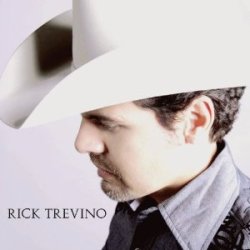 Back in 2003 the Texas-born Hispanic country artist Rick Trevino (a talented but inconsistent hit maker in the ’90s) released In My Dreams on Warner Brothers, produced by Raul Malo of the Mavericks. It didn’t sell very well, and the follow-up, also produced by Malo, was shelved. Now, following their resurrection of Shawn Camp’s 1994 last year, Warner Brothers have plucked this out of their vaults to finally see the light of day. And (like Camp’s record) it was well worth reviving, proving to be substantially better than its immediate predecessor.

Like its predecessor, with which the CD release pairs it a two-on-one basis, this album has a strong stylistic feeling of the Mavericks, although Trevino’s voice is very different from Malo’s Orbisonesque tenor. The arrangements are basically country-rooted, with Mexican flourishes (lots of mariachi horns) and some strings, making a very consistent musical palette. Trevino wrote most of the generally high quality material with one or both of Malo or Alan Miller, but one of the exceptions is the standout track.

‘Separate Ways’ is a downbeat piano-led ballad with a big soaring chorus and delicate string arrangement, written by Bill Anderson, Jimmy Yeary and Wally Wilson. Starting as a closely observed third person look at a couple, once so close, and their breakup, we see how:

The road that they were ridin’ split in two

Separate ways, his and hers
A love that went from great to good to bad to worse
Separate lives, what a waste
The last thing they ever did together was go their separate ways

The narrator is scared by this example (eventually revealed in the last line of the second verse to be his parents) and promises to work at his own relationship “every day”. The song is perfectly constructed and impressively sung, and it should have been a big hit in 2007, when it was released as a single but didn’t reach the top 40.

The only other outside song comes from the hands of Rodney Crowell. His ballad ‘Loving You Makes Me A Better Man’ is pleasant enough, with very Malo-ish vocal inflections, but the production doesn’t quite work for me, with its multi-tracked vocals.

Rick’s current single is the cheerful Tex-Mex ‘Better In Texas’, in which the protagonist abandons his Mexican sweetheart for a new love in Texas, deciding:

I know everything is better here in Texas
…
Now Mexico aint nothing but a memory
Pleasant as it might have been, it’s gone
I’d rather be here north of the border
The place where I belong

The exuberant mariachi horns work well on this track.

Another of my favorites is the jaundiced warning to a friend contemplating divorce, ‘Remember The Alimony’, although the bar room crowd noise at the end is unnecessary. I also rather like the simple philosophical ‘Matter Much’ which closes the album with fluid Malo-ish vocals on a generous message of live and let live:

Equally mature is a sensitively delivered and very touching tribute to an unknown relative, ‘Cousin Paul’, killed young (and before the narrator’s birth) in the Vietnam War, set around a family visit to the Vietnam War Memorial.

Less good, but still interesting are a bunch of songs which would have fit well on the Mavericks’ wrrok when they were making their biggest impact on country radio in the 90s. The plaintive title track and beefed up shuffle ‘Fool For Lesser Things’ are both very reminiscent of the Mavericks, the latter perhaps a little too heavy on the production for my taste. ‘Because Of You’ (written by the Trevino/Malo/Mille team with Jaime Hanna, and which the Mavericks also recorded in 2003) has a great fiddle led start and some cool (uncredited) bass backing vocals, but the lively production, while fun, has a bit too much going on at times with an extended brass instrumental section. Overall, I do like the retro feel of the song, which has Rick addressing the woman who has walked away with all his worldly goods, but left him with his very own broken heart. The horns do overwhelm the vocals on ‘Autumn Rose’, an otherwise pleasant but forgettable Marty Robbins styled romantic ballad.

One does not expect too much in the way of liner notes in this kind of release, but the lack of any musician credits is disappointing, especially as they still managed to find two space for a fold-out picture of the singer. Overall, though, this is a welcome revival, and those who missed the In Your Dreams album get those songs included as a bonus.

Buy it at amazon.