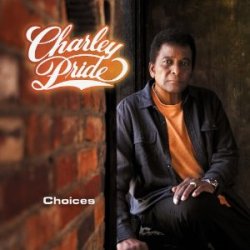 Charley Pride, who turns 73 today, is back with Choices, his first studio album since 2009’s Just For The Love Of It. Despite being off the charts for more than two decades, he has consistently turned out quality music since the major label phase of his career ended, and it’s reassuring to see a legend still going strong in the sixth decade of his long and esteemed career.

After opening with the patriotic “America the Great”, which questions if the nation has strayed too far from its Judeo-Christian roots, Choices turns nostalgic, focusing largely on the country pop sounds that ruled the airwaves in the late 80s and early 90s. If Wikipedia is to be believed, “Except For You” is his first single release in 21 years. It won’t get much airplay, but it is a well-crafted ballad that, while not traditional country in the strictest sense, is a refreshing change from the 80s pop/rock dreck currently dominating country radio playlists.

Adding to the nostalgic mood are two newspaper-themed songs about life in small town America “Hickory Hollow Times and County News” and “Guntersville Gazette”. The title of “I Miss My Home” suggests that it will be in a similar vein, but this is a more uptempo pop-flavored number, similar in style to the type of songs that were hits for Pride in the early 80s, towards the end of his tenure with RCA. Likewise, “Maybe Love Will Come and Save the Day”, the most traditional song on the album and my personal favorite, is reminiscent of hits from earlier in Pride’s career, such as “All I Have To Offer You Is Me” and “I’m So Afraid Of Losing You Again”.

Rounding out the set are a pair of songs that look back on long, successful relationships: “The Choices She Made” and “You Touched My Life.” Also included is a very nice version of “This Bed’s Not Big Enough”. Originally released by Louise Mandrell in 1985, it examines the age-old theme of competing with a partner’s old flame. Less effective are a a pair of uptempo tunes that merely act as filler: “Cajun Party Time” and “You Can’t Sit Still”, but “Resting Place” closes out the album on a high note.

At this stage of his career, Pride is clearly not interested in chasing the latest trend. There are no big surprises and he wisely never strays from his comfort zone. The production sounds slightly dated at times, particularly because of the album’s reliance on background vocal choruses. The choruses were likely used to camouflage Pride’s declining vocal powers; but while his voice may have some rough edges that weren’t there when he was younger, he’s in better vocal shape than most of his contemporaries such as George Jones, Merle Haggard and Willie Nelson. Choices is unlikely to win over any new fans for Charley, but it will more than satisfy those of us who can remember when he was still a staple on country radio.

Choices can be purchased online from Amazon or iTunes.