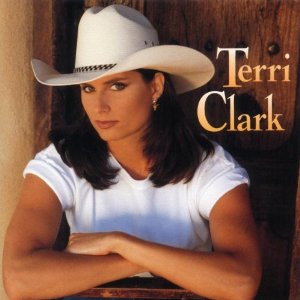 By the mid-90s, Nashville had drifted back towards more pop-leaning music, but there was still room on radio playlists for more traditional fare. Two Canadian women — Shania Twain and Terri Clark, representing both ends of the spectrum — had their commercial breakthroughs in 1995. Twain’s crossover music was more commercially successful, but Clark’s self-titled debut, produced by Keith Stegall and Chris Waters, struck a chord with fans of traditional country, and sold quite respectably in its own right.

The sassy up-tempo “Better Things To Do”, which Clark co-wrote Tom Shapiro and Chris Waters, was her first release. Immediately successful, it set the tone for the remainder of her career; her most successful singles over the next decade and a half, were up-tempo numbers in a similar vein. It peaked at #3 in both the US and Canada, and it remains one of my favorite Terri Clark tunes. The same songwriting team produced Terri’s follow-up hit, “When Boy Meets Girl”, which also reached #3 on the US and Canadian charts.

For the album’s third single, Mercury chose the traditional ballad “If I Were You”, which is the finest song on the album. Written solely by Terri, it demonstrated her skill as a songwriter, in addition to her fine vocal talent. Very similar in theme to Reba McEntire’s 1986 album cut “If You Only Knew”, the song deals with a woman who seeks relationship advice from a single friend. Instead of offering tea and sympathy, the friend (Clark) advises her friend to try and go home work things out, because the single life isn’t all it’s cracked up to be. Though it reached #1 in Canada, “If I Were You” didn’t perform quite as well in the US, peaking at #8. In a trend that would continue for the remainder of Terri’s major label career, US radio programmers proved to be somewhat lukewarm to her ballads. This was certainly the case with Clark’s next single, “Suddenly Single”, another tune she wrote with Shapiro and Waters, which just missed the Top 10 in Canada, peaking at #11, and fizzling out at #34 on the US chart. While to this day I remain perplexed as to why “If I Were You” didn’t chart higher, radio’s resistance to “Suddenly Single” is somewhat more justified. It’s a rather pedestrian song, saved by Sonny Garrish’s excellent steel guitar work. I’d have preferred to see “The Inside Story” released to radio, though it was probably too traditional to have had any realistic chance to become a bona fide hit. “Is Fort Worth Worth It”, the only tune in which Terri does not share a songwriting credit, is another one of my favorites. Like “The Inside Story”, it was likely deemed too traditional to send to radio.

The line-dancing craze was at the peak of its popularity in the mid-90s, and many of the songs on Terri Clark appear to have been written with that in mind. Tunes like “Was There A Girl On Your Boy’s Night Out”, “Flowers After The Fact”, and “Something You Should’ve Said” are all lyrically-light, beat-driven songs that are pleasant enough to listen to, but not particularly memorable.

I find that this is another one of those albums that I might enjoy more if it were sequenced differently. The first half is much stronger than the second. I tend to lose interest in it after track #7 (“When We Had It Bad”), as the only truly great track after that is “The Inside Story.” But while I do find some of the songs to be a bit weak, I wouldn’t classify any of them as actually being bad.

Terri Clark peaked at #13 on the Billboard’s US Top Country Albums chart, earning platinum status for sales of more than 1 million units in the US. In Canada, it reached #2 and earned triple-platinum status there, which in the 90s signified domestic sales in excess of 300,000 units. It remains her best-selling album in her native country, and is tied with her next two releases in the US.

Terri Clark is available inexpensively from third-party sellers at Amazon.