My Kind Of Country’s 2011 Grammy predictions 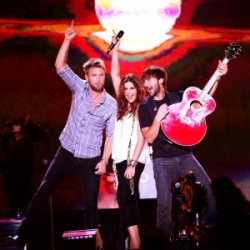 Sunday evening sees the premier all-genre music awards ceremony at the Staple Center in LA, and broadcast on CBS. These awards relate to music released in the eligibility period from September 1, 2009 to September 31, 2010. A lot of the country music awards will be awarded in the non-televised portion of the show, but news of the winners will be keenly awaited nonetheless. Last year saw Taylor Swift winning three country categories and the all-genre Album of the Year; she is not nominated this time. Who will dominate the country honorees this time around? And will Lady Antebellum who, like Taylor last year, are nominated in several all-genre categories, match or outdo her? One general point I’ve noticed is how many bluegrass based recordings have been nominated across the country categories this year, and I wonder if this will be reflected in the results.

Dierks Bentley, Up On The Ridge
Zac Brown Band, You Get What You Give
Jamey Johnson, The Guitar Song : Razor X
Lady Antebellum, Need You Now : Occasional Hope
Miranda Lambert, Revolution : J.R. Journey

Razor X: This is an unusually strong list of contenders. Bentley is the outlier in this group since his album had the least commercial success. I’m a bit torn as to whether I’d like to see him or Jamey Johnson take home this trophy. But if I’m forced to choose, I like the Johnson album a little better so that’s my pick for who should win. Since the Grammys have a tendency to recognize artistic merit a little more than either the CMAs or ACMs, I think Johnson will probably emerge as the winner.

J.R.: In a category full of top-of-their-game albums, Johnson and Lambert go into the Grammy show this year as the decided critics’ favorites, which usually spells win with NARAS voters. Both had broken through with their preceding albums, and with all eyes upon them, the leading man and woman of traditional country music turned in sets that not only built on their previous work, they both turned a couple more switches on in the process. With The Guitar Song Johnson embraced his southern rock and storytelling side, while still exploring even more and darker themes than we heard on That Lonesome Song. Revolution finds Lambert channeling the serious and introverted songwriter inside herself more than anything she’s done before, but she still retains the amped-up simplicity and accessibility we’ve come to love her for.

OH: Jamey Johnson’s double album is both the best and the most ambitious of these albums, but this is a more than respectable lineup . Dierks’s genre-blending mix of bluegrass, country and rock, the Zac Brown Band’s organic rootsy rock-country, and Miranda’s strong vocals and songs (notwithstanding the overbearing production/mixing), this is a group of albums all (with one jarring exception ) displaying real artistic ambition. I’d be happy with any of those four winning, but I’m going to be pessimistic here, and assume the Academy will be dazzled by commercial and crossover success, and pick Lady A’s high-selling but extremely bland Need You Now, which has also been nominated for the main Album of the Year category. I don’t think they’ll follow in Taylor Swift’s footsteps there, just because she is the only country winner of that category ever, but I think they should walk away with this one.

OH: We see a rather eccentric set of nominations in this category, with two big hits (Carrie Underwood’s earnest take on homelessness and heaven, and Miranda Lambert’s touching reflection on childhood) facing off against two not-very-good flops (LeAnn Rimes horrific remake of the John Anderson classic, and Jewel’s ‘Satisfied’), and a self-released Gretchen Wilson album track which is pretty good, but neither outstanding nor high profile. I feel ‘The House That Built Me’ is not only the best, but has to be the overwhelming favorite, with Underwood the only possible spoiler.

Razor: Unlike the album category, this list of nominees is particularly weak. I dislike all of these records with the exception of ‘The House That Built Me’, which I think should and will win.

J.R.: Piles of not-unfounded love and hype from all four corners will certainly put ‘House’ over the edge. And why not? There’s nothing that even comes close to it on this list.

J.R.: Urban has been enjoying what can only be likened to Vince Gill and Alison Krauss levels of love from the Grammy’s this decade. This is his best song and performance to be nominated in years, so it’s likely he’ll earn his trophy this year.

Razor X: This is another weak list of nominees. I only like the Jamey Johnson and Chris Young tracks. I’d be happy to see either one win, but I’d rather see Johnson win, even though ‘Macon’ isn’t the strongest track from his double album. I think he probably will win.

OH: Chris Young delivered the best vocal of these nominees, and would be my personal choice, but the song is mediocre, even if it was his breakthrough hit. Altough I’m not crazy about the song, I’m going to predict that Keith Urban will win based on name recognition and the fact that he is a Grammy favorite, having won this category three times out of the last five.

OH: An interesting selection of nominees with bluegrass, pop-country and the uncategorizable Zac Brown Band all vying for recognition, and none of them would really be an unworthy winner. ‘Need You Now’ has been sweeping the board at awards ceremonies for Lady A, and are probably the odds-on favorites, but I wonder if it might just have reached overkill point by now. Is this the first time a Cracker Barrel exclusive release has been nominated for a Grammy? Dailey & Vincent’s faithful cover of the Statler Brothers’ ‘Elizabeth’ has impeccable vocals, and is my personal choice, but I think the Zac Brown Band’s buzz will see them taking home the trophy, after winning last year’s all-genre Best New Artist.

Razor X: This is a better list of nominees than either the male or female categories. I’d like to see Dailey & Vincent win this one, but I think they are probably a long shot and that the trophy will go to the Zac Brown Band.

J.R.: Lady A’s behemoth of a country/pop hit is head-and-shoulders above its closest competition in name recognition alone. And only Little Big Town’s ‘Little White Church’ tops it here. Still, Lady A’s new-found superstar status should put them over any artistic-vision rewards Little Big Town or Dailey & Vincent may have earned.

Razor X: This is another strong list. All of these songs are worthy of consideration except for the execrable ‘Hillbilly Bone’. There is no question that ‘I Run To You’ is the best among these recordings, but I think it’s unlikely that it will win, because I suspect that neither Marty Stuart nor Connie Smith are particularly well known amongst the voters. I can see the Dierks Bentley vote being split, and the award going to the Zac Brown Band and Alan Jackson.

J.R.: For me, the two contenders here would be ‘Bad Angel’ and ‘I Run To You’, with the latter only slightly eclipsing the former. But I wouldn’t be surprised if any of these five take home the trophy. There’s a lot of heady competition here, and several of the best songs of the year. This is the strongest I’ve seen this category in memory.

OH: I feel Dierks Bentley’s bluegrass take on the U2 rock classic (assisted by Del McCoury and the Punch Brothers) has a good chance of appealing to Grammy voters because it ticks so many boxes.

J.R.: I think ‘Need You Now’ and ‘House’ are the strongest competitors here. Both songs enjoyed multi-week runs at the top of the country charts, and while Lady A topped the pop charts, Lambert’s tune bested them in the CMA race.  Surely the Grammy’s will follow suit.

OH: ‘The House that Built Me’ is by far the best song, and I think is the most likely winner.

OH: I like the Patty Loveless record the best, but think Peter Rowan will win for his return to the pure bluegrass he once played as a sideman for Bill Monroe before he ventured out into broader roots music.

Razor X: I’ve only heard the Patty Loveless and SteelDrivers albums and liked them both a lot. I would love to see Patty Loveless win but I suspect that one of the full-time bluegrass artists will edge her out. I’ll take another shot in the dark and say that The SteelDrivers will win, though it’s a pretty uninformed guess on my part since I’m not familiar with the other nominees.

Other country records nominated are Rosanne Cash’s lovely covers set The List and Willie Nelson’s magisterial Country Music, both in the Americana category (against Los Lobos, Robert Plant and Mavis Staples). I’d love to see one of them win.

Who do you want to see triumph on Sunday?

4 responses to “My Kind Of Country’s 2011 Grammy predictions”