Album Review: Reba McEntire – ‘All The Women I Am’ 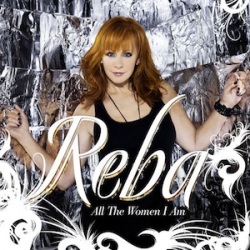 The moon controls the tides, your taxes are due April 15th, and Reba McEntire is having hits on the country charts.  These are some things we’ve become accustomed to.  For her 26th studio album – and 2nd for the Valory Music Co. – Reba has enlisted the help of current hit-making producer Dan Huff, whose production credits run as deep as McEntire’s own career, but is known in country circles for hits by Keith Urban, Faith Hill, and Carrie Underwood.  The ever-evolving redhead has kept it relevant for what is three decades now, and shows no real signs of wear and tear just yet.  She effortlessly glides through the 10 tracks on this set, hitting spine-tingling notes when the need arises, and more often than not, nailing every emotional aspect of the lyrics with precision.  The songs themselves are certainly a step above her current work, and reflect her maturity a little better.  All the women that make up these characters are seasoned at life, looking back with hard-won wisdom or jumping head-first, all the while knowing the risks.

The title track is a jaunty, twangy trip into the psyche of an everywoman.  Though it’s mostly sewn together from the kind of empowerment statements usually reserved for bumper stickers – “I burn brighter than a candle but I melt in the right hands” – and the fact that it comes from a songwriting team of three men, it’s hard to take it for more than a feel-good number without any real message.  A jazzy saxophone solo at the end and lines like “I can light up New York city with my red hair and rhinestones” increase the fun-factor by two however.  And in that regard, it can succeed.  ‘A Little Want To’ follows the same sound template as the title track, yet offers even less in the lyrics, leaving it little more than an up-tempo jam with the guitars mixed way too loud.

‘When Love Gets Ahold Of You’ features the kind of soaring chorus you can almost sing along to on the first listen.  But that’s probably because it sounds like a hybrid of the past 4 pacy Keith Urban hits.‘The Bridge You Burn’ is another earworm, wherein a woman is discovering her own self worth after a bad relationship. Reba makes it hard to dislike either of these songs with engaging performances, but these kind of melodies always make you feel a bit guilty for enjoying them too much.

Reba’s reading here of the Beyonce hit ‘If I Were A Boy’ seems timid compared to her CMT Unplugged performance that was a viral video hit over the Summer.  Pairing a voice like Reba’s with a marvelous lyric like the gender-gap realizations of ‘If I Were A Boy’ was a stroke of genius, and even without all the fancy vocal work of the live version, she does not disappoint.  Then it’s back to coasting through tracks like the album’s closer ‘When You Have A Child’ and ‘Somebody’s Chelsea’, written by Reba with Liz Hengber and Will Robinson, a sweet love song with the obligatory advice-from-a-wise-old-man. (Ever the jet-setter, Reba meets her wise old man on a plane.) Neither offers anything substantial besides a tug at the old heart-strings, and the singer’s performance sounds like she knows these are filler songs.

The real stand-outs come when the songstress gets ahold of a lyric worthy of her talents. She does this best with ‘Cry’ and ‘The Day She Got Divorced’. The first is vintage Reba, a strong woman weeper that quickly turns to power ballad mode, where it remains. ‘The Day She Got Divorced’ is wickedly awesome in its frank storytelling. The story revolves around the activities of a woman on the day she goes to court to dissolve her marriage. We follow her to a motel where she continues an ongoing affair with her boss and then on to a house that needs cleaned and is filled with “hungry-mouthed kids”. It’s full of great one-liners and features a funky guitar riff after reach repeat of the title line. Both songs come from the pens of Brandy Clark and Shane MacAnally, with Mark D. Sanders co-writing on ‘Divorced’.

An album full of gutsy, emotional songs like ‘Cry’ and ‘Divorced’ would have served the 55 year-old better than covers of recent pop hits side by side with fluffy radio-friendly fare, but Reba is obviously hell-bent on staying at the top of the hit-making heap.  Certainly, a handful of these cuts could find their way to the top of the page of the country singles chart.  As with the songs and themes found on All The Women I Am, the results are varied, but are more enjoyable than not.

9 responses to “Album Review: Reba McEntire – ‘All The Women I Am’”