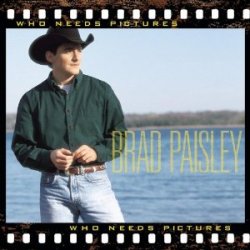 When Brad Paisley’s debut album was released in 1999, it was a real breath of fresh air with its mix of comedy and serious numbers. Frank Rogers gave it a nicely railed back production. Brad wrote every song (most often working with Chris DuBois) with the exception of a sincere sounding version of the hymn ‘The Garden’ which closes the set, and he showed off his instrumental prowess by playing acoustic, electric and bass guitars. There is even a showy instrumental cut but ‘The Nervous Breakdown’ doesn’t do a lot for me.

Brad emerged on the scene with the fine title t﻿rack, which peaked at #12 on Billboard. The protagonist’s wistful memories of happier times are sparked off by the unexpected discovery of a (pre-digital) camera with undeveloped film of vacations with a lost love, but he concludes:

It has a tasteful string arrangement.

Brad followed this up with his breakthrough hit and first #1, the charming and genuinely touching ‘He Didn’t Have To Be’, a tribute to a loving stepfather which Brad wrote with Kelley Lovelace, whose own family background inspired the song. It opens with the apt observation,

The protagonist grows up to measure himself as a potential father against the man who took them “from something’s missing to a family“. This is still one of my favorite Brad Paisley songs.

Comedy had largely slipped out of the country mainstream over the course of the 80s and 90s, and Brad has revived it. The third single from the album was the entertaining ‘Me Neither’ (written like ‘Who Needs Pictures’ by Brad with DuBois and producer Rogers) has Brad optimistically trying out a range of pickup lines on a lady who is clearly not as interested as he believes, and unsuccessfully struggling to save his dignity by backing down to agree with her each time, essaying rather desperately at one point,

It is of course all too clear that she doesn’t want to move at all. Radio was a little uncertain as to how to deal with it, and the song stalled at #18, making it Brad’s least successful single to date.

My favourite of the funny songs on the album is ‘It Never Woulda Worked Out Anyway’ (another co-write with Kelley Lovelace), whose protagonist does his best to ruin the romantic prospects of the object of his affection. The character Brad plays here may be disingenuous, but the song has an irresistibly effervescent charm which robs it of any potential offensiveness – perhaps because the hyperbole of some of his allegations makes them unlikely to be taken seriously, scaring off one potential boyfriend by claiming she “used to be a man”, and telling another desirable parti,

You had seven little kids
And you doubled as a dancer at the strip joint on the ridge
Even if I am responsible for scaring him away
You really ought to thank me, I was doin’ you a favor
‘Cause it never woulda worked out anyway

Verging on the absurd though it is, I love this song.

The self-deprecating but uninspired ‘Sleeping On A Foldout’ is less amusing with its tale of the effects of petty marital misdemeanours, but I like the light-hearted opening complaint against a ‘Long Sermon’ on a sunny summer Sunday (written with Tim Nichols) which opens the album.

It was back to the serious songs for the album’s final single, ‘We Danced’, a sweet story song about a chance encounter which turns into true love which is reminiscent of some of Garth Brooks’ less bombastic work and which was Brad’s second #1.

Back struggling with the aftermath of failed romances, Brad is indignant at the very thought of stopping loving her in ‘Don’t Breathe’ (pleasant but forgettable filler which is the only solo composition), and stoic by the sea in ‘I’ve Been Better’ (written with Robert Arthur). He is still brooding over the loss while trying to move on in the closely observed ‘Holdin’ On To You’, written with both DuBois and Lovelace, which is very good.

One of my personal favorites is the downbeat look at a Texas farmer’s heartbreaking obstinacy in the face of catastrophic drought:

Brad’s never really done anything else in this vein, which I think is a shame.

The album brought Brad immediate and well-deserved success, and has been certified platinum. He was named the ACM New Male Vocalist of the Year in 1999 and won the CMA Horizion Award the following year.  Who Needs Pictures was an excellent debut which set Brad apart from his contemporaries by effortlessly combining humor and sincerity. Brad doesn’t have the best voice in country music, but at their best his songwriting skills more than compensate.

If you’ve missed out on this record, it is well worth catching up on. Used copies are available inexpensively from amzon, and it’s also available as a digital download.