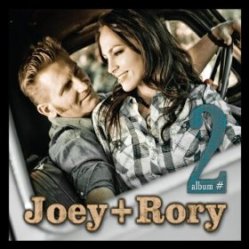 Joey + Rory’s long-awaited sophomore effort was released last month. The appropriately-titled Album #2 finds the duo joining forces once again with producer Carl Jackson, and using the same primarily acoustic-based formula that worked so well for them on their 2008 debut album The Life Of A Song, which we reviewed last month as part of our coverage of the new New Traditionalists.

The most noteworthy change from The Life Of A Song, is that Rory, who wrote ten of the album’s twelve tracks, is featured more prominently here, occasionally chiming in to share lead vocals with Joey, and taking the lead completely on “My Ol’ Man”, a moving tribute presumably written about Rory’s own father. Rory is not a particularly gifted vocalist, but the well-written material and understated production more than compensate for his vocal shortcomings.

The album opens with the title track, a witty number about the pressures a fledgling country music act faces as it tries to avoid the dreaded sophomore slump:

This last year’s been a whirlwind, but we’re doing well we’re told,
Been up and down the highway, and on the radio
Sold a lot of our first record, we even had a hit
Now the big wigs back in Nashville say we better kick it up a bit
The critics all are waiting, to see what we will do
For much anticipated album number two.

Some say to go more country, some say we should turn pop
They’ve all got their opinions, on how to take us to the top
Our new image consultant, says we need a fresh hairdo,
As if that’s gonna make or break album number two …

In a similar vein, “Baby I’ll Come Back To You” offers a clever when-hell-freezes-over theme and manages to name-check a number of country stars in a manner that would have made The Statler Brothers proud:

Now I’m not saying there’s no chance at all
But it don’t take no crystal ball
To see the chance is mighty slim, Chris Gaines or me are coming back again
When Willie gives the weed up, and cuts off all his hair,
When George Jones finally says he need’s his rockin’ chair,
When Dolly gets a breast reduction down a size or two,
Then maybe, just maybe, maybe I’ll come back to you

And later they indulge in a little self-deprecating humor with:

When we sell a million copies of album number two,
Huh? We’ve sold how many?
I said maybe, just maybe, maybe I’ll come back to you.

Like its predecessor, Album #2 is a rather quiet affair, managing to avoid the traps of over-production and engaging in the loudness war, which plague so many contemporary country albums. The stripped-down, mostly acoustic arrangements and Joey’s understated vocal performance work exceedingly well on tracks such as “Born To Be Your Woman”, “The Horse Nobody Could Ride”, “Farm To Fame”, and “Where Jesus Is.” It doesn’t work quite as well on “God Help My Man”, which cries out for a feistier performance. I would have loved to have heard what Loretta Lynn would have done with this song back in her heyday.

“You Ain’t Right”, which is one of only two songs in the collection contributed solely by outside songwriters, is a decent song that suffers in comparison to Randy Travis’ superior version. The album’s biggest misstep, however, is the closing track, “This Song’s For You”, on which the duo collaborates with the Zac Brown Band. It is the only track on the album not produced by Carl Jackson. Instead, Keith Stegall is in the control booth. Often criticized for supposedly pandering to fans, “This Song’s For You” is not unpleasant to listen to and might actually work well live on the concert stage, but it seems out of place with the rest of the album. Because of the difference in style and its placement as the last track, it almost seems like a bonus track. However, it was released as the album’s lead single, in an apparent hope that the Zac Brown Band’s current popularity would result in some radio airplay. The strategy was not successful, however, as the single failed to enter the charts.

The second single, the more typical “That’s Important To Me” was sent to radio this month. At this time, it has yet to appear on the charts. None of Joey + Rory’s singles, aside from their debut “Cheater, Cheater” have charted. I suspect that this will be continue to be the case with any future singles released from this album, as they are not in the vein in which country radio is currently interested. However, the album managed to reach #9 on Billboard’s sales-based Top Country Albums chart, which suggests that Joey + Rory may have managed to find a niche of devoted fans that will buy their records, even if they don’t produce any radio hits.

Overall, I like Album #2 better than the first album. It is widely available and is currently available for download at Amazon for the bargain price of $5.