Album Review: Sammy Kershaw – ‘Better Than I Used To Be’ 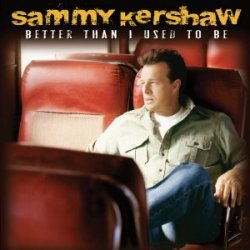 It really is tempting fate for any artist, particularly one who is past his or her commercial peak, to entitle an album Better Than I Used To Be, because (almost always) it begs a negative answer. Rich-voiced 90s star Sammy Kershaw has been away from the charts for a while, most recently concentrating on a venture into Louisiana state politics. His new album is on an independent (possibly self released) label, Big Hit Records. However, while I don’t think Sammy’s music is “better than it used to be”, the new album stands up pretty well against his back catalog. There are no obvious hit singles here, but Sammy is still in fine voice, and Buddy Cannon’s supportive production is excellent, and undoubtedly country.

The album is bookended by songs Sammy himself had a share in writing. The unremarkable but energetic ‘That Train’, which he wrote alone, opens the album. In an interview with the 9513 earlier this year, Sammy admitted:

“I’m not much of a songwriter but every once in a while I get lucky and write one in 10 or 15 minutes. If it goes any longer than that, I get rid of them. I never work on them again”

Frankly, this song does indeed sound as though it only took a few minutes to write, although it clearly inspired the cover art. Much better is the co-write with John Scott Sherrill and Scotty Emerick which closes the set. ‘Takin’ The Long Way Home’ places the protagonist in a bar, because he has too little to go home for, with a woman who’s obviously on her way out. The sweet sadness of the fiddle line underscores the delicately understated emotion of a man who has no remedy for his sense of abandonment, as he concludes at the end of the evening,

However rash it may be as the title track, ‘Better Than I Used To Be’, written by Brian Simpson and Ashley Gorley, is a highlight of the record. It is a tender, even inspiring, promise from a man who has made mistakes in the past and is in the process of turning his life around:

But he acknowledges this is a work in progress in this lovely, mature song. A video was made to support this song as a single earlier this year, and it is a shame it failed to make many waves.

Equally good is the subdued sadness of ‘Like I Wasn’t Even There’, written by Wes Hightower, Monty Criswell and Tim Mensy. The protagonist runs into his ex for the first time since the breakup, and is ignored as though their relationship never existed.

The other outstanding song is Hugh Prestwood’s gently presented statement of commitment (thoughtfully patriotic rather than jingoistic) as expressed by a young Louisianan taking service to defend his country, inspired by ‘The Snow White Rows Of Arlington’:

Sammy is joined by Jamey Johnson on a ramshackle version of Shel Silverstein’s classic ‘The Cover Of The Rolling Stone’; it is undoubtedly entertaining but one gets the impression they were having more fun in the studio than the audience has hearing it, with Sammy’s vocals not at their best. It’s the kind of thing which tends to work better live than on record. The moderately amusing beach song ‘Saltwater Cowboy’ (declaring “There’s gotta be one fish down there dumber than I am drunk”) was previously recorded by Tracy Byrd on his fine 2006 album Different Things. I’m not sure it was really worth reviving, but Sammy definitely invests it with a lot of personality.

The best of the fun songs is the Billy Yates/Buddy Cannon song ‘I Ain’t Fallin’ For That’, a bouncy rejection of commitment following an unhappy experience with marriage, with some nice fiddle from Rob Hajacos, and prominent harmonies:

Not everything is as good. ‘Everybody Wants My Girl’ is boring filler. ‘Through The Eyes Of A Woman’ (about gender differences within a relationship) is mediocre lyrically but mildly catchy. ‘I See Red’, written by Wil Nance, Dean Dillon and Buddy Brock, is a decent but not very memorable midtempo number about dwelling on losing a woman. The hook idea is neat, but the final product is just not that memorable.

Overall, though, this is solid return from Sammy Kershaw, one of the more underrated artists of his era.

3 responses to “Album Review: Sammy Kershaw – ‘Better Than I Used To Be’”