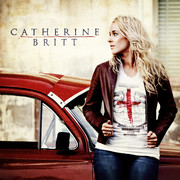 Australian-born Catherine Britt is one of those artists whose careers never quite took off in the US, despite an abundance of talent. Her debut single ‘The Upside Of Being Down’ was only a very minor hit, and Too Far Gone, the excellent album she recorded in Nashville for RCA, was only released in Australia. A subsequent album Little Wildflower, also recorded in Nashville, was not quite as good.

Catherine has now returned to her homeland, and reunited with her former producer Bill Chambers, who has served as her mentor since she was a precociously talented eleven-year-old. He is assisted on this record by his son-in-law Shane Nicholson, and together they have made an album which is a little closer to Americana than straight country. Catherine is a fine songwriter and has written or co-written every track here.

Not everything here works for me. I didn’t really enjoy the opening track ‘I Want You Back’, written with producer Bill Chambers, which I thought was well-written lyrically but surprisingly rock sounding and lacking much of a melody. I liked even less the over-produced and processed ‘Under My Thumb’, written with fellow Australians Morgan Evans and Mark Wells. Happily these tracks proved to be in the minority.

Catherine’s solo composition ‘Holy River’ is a more effective stripped down traditional blues groove set to only Bill Chambers’ dobro, which I liked a lot. Also blues-based is the wailing ‘Lonely’, written with Chris Stapleton (late of the SteelDrivers), where she compares her emotions to those of a train.

Better still is the charming ‘Sleepy Town’, the most deeply rooted country of all the tracks here, which sounds as though it might be a traditional number, with its lilting melody and folk-style lyrics, with the protagonist talking wistfully of returning home to where her parents are buried. This and ‘Lonely’ are the only tracks to feature fiddle. The best song is a proper studio version of the lovely ‘Sweet Emmylou’, which Catherine wrote with Rory Lee Feek. She included a demo version as a bonus track on her last release, and the song has also been cut by Joey + Rory. Catherine’s wistful version here is beautiful and well worth hearing, although I marginally prefer the Joey + Rory version.

Another of my favorites is ‘Since You Slipped Away’, a ballad written with Jedd Hughes (another Australian, who is now working with Sarah Buxton). This dwells on the hurt caused by the end of a relationship, with delicately understated emotion:

Now I’m wrapped up in this mess you left
Since you slipped away
Now I’m building walls and closing doors and leaving you behind
Shutting out the hurt inside and taking back my mind
The blood you drew, it hurt you too, now we both have to pay

Much of the direction Catherine is taking reminds me a little of the equally talented Ashley Monroe, with whom she became friends when they were both hoping to capitalize on major label deals a few years back. Catherine has recorded three songs they wrote together, the best of which is the disillusioned ‘Call You Back Town’, as Catherine ruminates on her harsh experiences in Nashville:

The rather lonely love song ‘Anywhere You Are’ has fragile vocals and a vulnerable feel. I quite liked ‘Down’ and its poetic but rather oblique lyrics about being brought down by love, although it does not feel very country.

Catherine turned to a newer collaborator, Australian folk-pop singer-songwriter Melanie Horsnell to write the subdued ‘Saved Me’, a more optimistic sequel or companion piece to ‘Down’, with very similar imagery and feel, but with a more stripped down production. Horsnell provides backing vocals on the track, and also co-wrote the jauntily unrepentant pop-styled ‘Can’t Change A Thing’, and the pretty sounding ‘More Than you Are’.

The record closes with the delicate ‘Where Do You Go?’, written with Caitlin Evanson (Catherine’s former fiddle player, now working for Taylor Swift) and James Slater, which reflects quietly on the fragility of life and evanescence of happiness against a simple piano backing supplied by Nicholson.

This is a strong and interesting record, and one which grows on repeated listens. While I must admit a fleeting regret that Catherine has moved away from the style of Too Far Gone, one of my favorite albums of the past decade, she is certainly showing real artistic development.

As an Australian import this is not cheap to get hold of. It is available from Amazon and from a few enlightened stores.