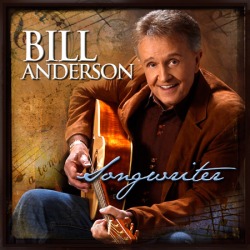 Even at the height of his stardom, it was widely acknowledged that “Whispering” Bill Anderson wasn’t much of a singer. But he was, and remains, an excellent country songwriter, who continues to get cuts by some of today’s biggest stars. He has just recorded a dozen of his latest songs on an independently released record, co-produced with multi-instrumentalist Rex Paul Schnelle, who plays electric and acoustic guitars, mandolin, banjo, piano, and keyboards and sings backing vocals – basically every instrument but drums, bass and steel.

The songs are all co-writes, and I was struck by the generosity with which Bill puts his own name last in the credits each time. His vocals are no stronger than one might expect, but on most of these songs it doesn’t matter. Half the songs are comedic, and do not demand great singing; in some of the others the limitations of his voice is put to good use.

The stall is set out with the opening track ‘It Ain’t My Job To Tote Your Monkey’, co written with the album’s producer Rex Schnelle and Rivers Rutherford. It’s a very witty riposte to someone who’s never satisfied whether it’s because:

Also laugh-out-loud funny is the episodic ‘That’s When The Fight Broke Out’ which recounts a hapless husband’s many ill-judged remarks in a series of one-liners. A sense of humor is not necessarily conducive to a happy marriage.

‘Good Time Gettin’ Here’ is a good-natured recital from the kind of guy who wastes most of his time having fun, declaring from high school graduation to his arrival at the gates of heaven:

Written with Jamey Johnson and Buddy Cannon, this entertaining song could easily be a hit single for someone like Brad Paisley.

Speaking of Brad, he co-wrote and plays electric guitar on the rather vulgar ‘If You Can’t Make Money’ with Jon Randall also co-writing. The advice for economic hard times is to make love instead of money:
We can’t get a break, can’t get a job
We need to get the opposite of laid off

This is one of the songs where the vocal limitations are a problem, making the song sound sleazy.

Brad could also cover the amusing and faintly Caribbean sounding ‘Wherever She Is’, co-written by Bill with Bobby Tomberlin and Jim Martin, in which the protagonist is thankful to be rid of his ex:

Wherever she is I hope she stays there

My favourite track is ‘The Songwriters’, written with Gordie Sampson and recorded as a duet presumably with Schnelle (the only person credited with additional vocals), which mixes funny lines with a serious look at the songwriter’s life

We write bridges, cross ‘em and burn ‘em
Teach lessons but don’t bother to learn ‘em
Our mamas don’t know what we’re doing
Or why we stay out all night long
I told mine I was a drug dealer
She said “Thank God you ain’t writin’ songs”

But it’s not all about comedy. The best of the serious songs is ‘Some Kind Of War’, written with Coley McCabe and John Wiggins, which admonishes us to remember that bad behaviour might hide secret traumas:

Lord, help me stop and understand
Before I rush to judge my fellow man
It’s not always on CNN
It’s down the street and right next door
Life itself can be a battlefield
And we’re all fightin’ some kind of war

The vocal has an everyman sincerity which cuts through to the listener.

There is a sweet story of lifelong love, co-written with Jon Randall (with whom Anderson wrote the award-winning Whiskey Lullaby’), in which old man declares that he could not cope without his wife of 50 years, ‘If Anything Ever Happened To You’. Bill’s strained vocals are effective expressing the old man’s feelings here, and on the warmly nostalgic and possibly autobiographical memories of ‘Papaw’s Sunday Boots’, written with Joshua Ragsdale.

Elsewhere, Bill struggles to find ‘One Bad Memory’ about an ex to make the loss easier to bear, in a song written with Barry Dean and Tim Nichols. This is a good song, but one of the few here that really demands a more polished vocal. The protagonist of ‘While Talking To Myself’, written with Billy Montana offers himself some advice about how to cope with the end of a relationship. ‘Thanks To You’, which is being promoted as a single, is a pleasant but boring love song with synthesised strings which are somewhat incongruous.

While Bill Anderson is a limited singer, the songs here are almost all entertaining, and this is a welcome reminder of the talent of one of the best songwriters still working. Comedy songs can be very hit and miss, but there is more hit than miss here.

As far as I know this is only available from Bill’s website.