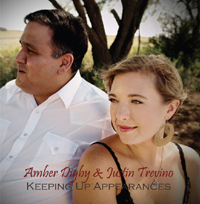 Only a few months after the release of her last solo album, Amber Digby is back with a collection of duets with her longterm producer Justin Trevino, a recording artist in his own right with a vibrato-laden tenor reminiscent of the country music of the 1960s. Their voices blend together very well, bearing comparison with the classic duos of the past, and the result is a delightful record which sounds as though it could have been made 40 years ago yet has a timeless feel. The production (credited jointly to Amber and Justin) is exemplary, with the musicians including Amber’s husband Randy Lindley on various guitars and stepfather Dickie Overbey on steel.

As has become customary for an Amber Digby record, everything here is a cover (mostly from the 1960s or early 1970s), but the pair have mixed in some obscure cuts in with the better known songs, and the quality of the 14 songs selected is uniformly high. The subject matter is exclusively relationships: love songs, cheating songs, and tales of marital unhappiness.

My favorite track on the album is the pair’s version of ‘Lead Me On’, a smash hit in 1971 for Conway Twitty and Loretta Lynn. This has a couple on the verge of an illicit relationship and wanting some encouragement. The vocals are particularly outstanding here from both Justin and Amber.

The fiddle-led ‘Which One is To Blame’ is another delightful cheating song mixing regret and desire, with Amber and Justin swapping lines through the song, as they share the anguish of forbidden love:

Amber: Somehow I can’t blame myself
Although I guess I should
Justin: And I can’t put the blame on you
I wouldn’t if I could
Amber: We’ve made ourselves the gossip of the town
Justin: The things we’ve done can only bring us shame
Together: We’ve let our passion drag our honor down
I wonder which one of us is to blame

There is less penitence in the defiant passion of ‘After The Fire Is Gone’, where the couple blame their infidelity on a moribund marriage. This is a great song which has been recorded so many times I sighed inwardly when I initially saw it on the track listing, but this is a very fine version which is well worth hearing.

Liz Anderson is responsible for writing no less than three cuts, all excellent songs dealing with unhappy marriages. The title track is a great song which was an obscure early single (it reached #49) for her daughter Lynn (duetting with Jerry Lane) in 1967, in which the couple pretend to be “such a happy couple” in public but have nothing to say to each other at home,

“keeping up appearances
when we should say goodbye”.

I think it is just as good as the better known and identically themed ‘Just Between The Two Of Us’ , a top 30 hit for Merle Haggard and his wife Bonnie Owens in 1966. Everyone they know admires the implicit faith they have in one another,

‘That Makes Two Of Us’, another Liz Anderson song recorded by Merle and Bonnie, has a couple about to give up on each other, which sets the deep irony of the lyric to a bright rhythm :

Amber: I’m all through with trying to make a go of us
And I’ve given up on giving him so much
Justin: As far as I’m concerned it’s over but to pack
I could walk away and never once look back.

Merle and Bonnie also originally recorded ‘Slowly But Surely’, a cheerful look at falling in love. There are a couple of other positive love songs: Porter Wagoner and Dolly Parton’s #14 hit from 1971 ‘Right Combination’ (nice but not one of Porter’s best songs), and the lesser-known but very charming ode to true love ‘High As The Mountains’ (B-side to Buck Owens’s hit ‘Foolin’ Around’ in 1961). The hopeful appeal to stop ‘Kicking Our Hearts Around’ and resolve an estranged (but still loving) couple’s marital difficulties is an obscure Wanda Jackson single from 1965, and works well as a duet.

‘Wish I Didn’t Have To Miss You’, a song about a couple separated by work, written by Hank Cochran and Dave Kirby and originally a big hit (#2) for Jack Greene and Jeannie Seely in 1970, is one of the few tracks to sound dated with an arrangement that doesn’t quite work. Happily this is a rare unsatisfying track on this album. Amber’s aunt Mona McCall provides the harmony on the oldest song here, the sweetly sung ‘How’s The World Treating You?’, written by Chet Atkins and Boudleaux Bryant and originally a 1953 hit for Eddy Arnold, and covered by everyone from Elvis to the Louvin Brothers, most recently being revived by Alison Krauss with James Taylor. It’s a fine song, and although it does sound old fashioned, it is prettily done.

I preferred the brilliantly executed story of a woman who leaves her honky tonking husband due to his spending too much time in the ‘Wrong Company’, a Harlan Howard song which was a minor (#26) hit for Harlan’s wife Jan Howard and Bakersfield Sound pioneer Wynn Stewart with this in 1960.

He doesn’t listen, so she leaves him to regret the choices he’s made. This song has Justin signing in a noticeably higher key than elsewhere.

The album closes with the reproachful George Jones cover ‘Flame in My Heart’ (a great song often overlooked because his duet partner was the unknown Virginia Spurlock) with call-and-response vocals as a couple fall out of love.

Notwithstanding the downbeat lyric, this is yet another joy to listen to.

In short: a great record from two fine neo-traditional singers who deserve a wider audience, packed with great material. I think it’s one of the best records so far this year.

This record seems to be only available from the label website at the moment, but I would expect it to show up on Amazon and elsewhere in due course.