Album Review: Miss Leslie – ‘Wrong Is What I Do Best’ 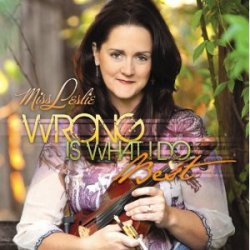 This blog’s very first Spotlight Artist, back in January 2009, was the independent neotraditionalist Miss Leslie, who has just released her fourth album. She is not as great a vocalist as Amber Digby (to whom she can be compared in many respects) , but she has the advantage over her of being a songwriter. She has written all but one of the 14 songs on this album, and they are all pretty solid songs in the traditional honky tonk style. The instrumental backing is positively drenched with Miss Leslie’s own fiddle and her husband Ricky Davis on steel, and this record is a sheer joy to listen to from start to finish.

Miss Leslie balances her musical diet of hard honky tonk music and themes rooted in the traditions of country music, with the sensibility and experiences of a 21st century woman in what she calls a ‘patriarchal world’ in the liner notes. These contemporary attitudes are evident from the opening track ‘I Need Me (A Whole Lot More Than I Need You)’ as the protagonist determinedly reclaims some self-respect when she decides she’s better off single and lonely than trying to be what her lover wants.

The theme almost bookends the set, as towards the end of the album we see someone defeated in the same battle. ‘She Gave Up On Herself’ tells the story of a woman who gives too much of herself to the man “she thought she needed so bad” and loses “the best thing she had”, her sense of self. The protagonist of ‘I Can’t Live With You, But I Can’t Love Without You’, is determined not to make that mistake, as she struggles to cope with a difficult relationship, where love is not enough to make everything okay.

Modern technology makes an appearance in the irresistible up-tempo tale of the ‘Drunk Dialer’, who incessantly calls, voicemails and texts her unfortunate sober and sleeping friends through the early hours of the morning. The vibrant title track balances traditional themes with the modern world, with Miss Leslie boldly claiming the honky tonking attitude more usually associated with male performers:

A little more conventionally, ‘Anyone’ is a neat little swipe at an ex who claimed anyone would be better than her, and finds out the hard way he’s wrong:

Sad songs and broken hearts are the life blood of country music, and I love the classic sounding heartbreak ballad ‘Turn Around’, where Leslie begs her man not to leave, with copious steel and a beautiful tune. In the deeply resigned ‘All You Do Is Make Me Cry’ the protagonist has given up, realizing there’s no point talking it over any more. ‘There’s Two People Here Not Talking’ is a wry look at a couple not communicating.

Elsewhere, we share the story of a lovelorn woman with a crush on the guitarist playing in her local bar ‘Every Tuesday Night’, with its wider resonance:

There is clearly going to be a happier ending for the couple in the engaging ‘Let’s Start Over’, as independent traditional country artist Jason Allen joins her on a very retro-styled let’s-get-back-together duet which is very pleasing, with their voices blending well.

There really isn’t a track here I don’t like; the closest is the up-tempo ‘Lie Lie Lie’, which is just okay but doesn’t stick in the mind. The dramatic closing track ‘The Last Time I Drank’ is the confession by a woman who kills her child drunk driving. This may verge a little on the melodramatic, but it is emotionally convincing, and is part of a long tradition of tragic songs of this kind in country music.

The one song Leslie did not write herself comes from her sister Hilary Sloan, and moves out of the honky tonks. ‘Some Things They Can’t Take Away’ is a serious and heartfelt response to the economic downturn, based on its impact on one person. This deeply emotional, sympathetically delivered, song is the highlight of the record, urging a loved one who can’t find work and is struggling to make ends meet, to hold on to their undying human spirit:

You imagined that you’d find a better life here
Couldn’t get no worse, this must be your year
If you could only break even, then you’d be okay
But you’re back to begging – you’d do anything

Miss Leslie is an artist who is getting better with every release, and this album is thoroughly recommended to anyone who enjoys the more traditional honky tonk end of country music.

You can listen to and buy the Wrong Is What I Do Best from Miss Leslie’s official site.

3 responses to “Album Review: Miss Leslie – ‘Wrong Is What I Do Best’”