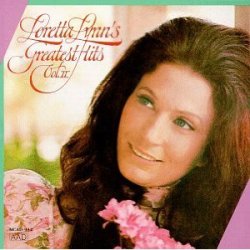 We’re continuing our survey of Loretta’s career with her second installment of Greatest Hits, released in 1974, and covering her career from 1968 to 1973. Although this compilation covers only some of her hits over this period, and misses out the controversial divorcee-themed ‘Rated X’, it is a good overview of her career in those years, arguably her artistic and commercial peak. She tended to release only one or two singles per album throughout the 1960s and ’70s, but they were usually by far the best songs.

The earliest hit here is ‘Fist City’, another in Loretta’s string of feisty songs inspired by real incidents, in this case addressed to a woman who had been making moves on Loretta’s husband while she was working. Its attitude is more confrontational than the similarly themed ‘You Ain’t Woman Enough’ a couple of years earlier – perhaps because it was more personally inspired. Loretta tackles the woman head-on to threaten her with physical violence if she doesn’t back off:

You’ve been a’makin’ your brags around town that you’ve been a-lovin’ my man
But the man I love, when he picks up trash, he puts it in a garbage can
And that’s what you look like to me, and what I see’s a pity
You’d better close your face and stay out of my way
If you don’t wanna go to Fist City

It was Loretta’s second #1, hitting the top in May 1968. Later that year she had a #3 hit with ‘Your Squaw Is On the Warpath’, an idea inspired by her half-Cherokee mother when fighting with Loretta’s father. Apart from the use of Native American imagery and a haunting the lyric is actually a typical example of Loretta’s wronged wife and mother refusing to lie down and take it when her cheating husband comes home drunk expecting a loving welcome. The lyrics might fall foul of political correctness these days, although Loretta has spoken about her pride in, and identification with, this side of her heritage; the album cover with Loretta in Native American costume (pictured left) certainly would be seen as offensive today, although there is absolutely no doubt Loretta intended nothing of the kind. The Jordanaires provided backing vocals on many of Loretta’s recordings, but rarely as prominently as on this track. Incidentally she chose to cover Hank Williams’ ‘Kaw-Liga’ on the same album.

The following year’s ‘Wings Upon Your Horns’, which was relatively unsuccessful, only reaching #11 on Billboard, was written by Loretta with her sister Peggy Sue, an aspiring singer herself. It is the first-person tale of a scarlet woman, once an innocent young country girl seduced under promise of marriage. She accuses her devil-like lover:

The autobiographical ‘Coal Miner’s Daughter’, which is probably Loretta’s signature song thanks in part to the book and film of the same title a decade later, was a #1 hit in 1970. It originally had twelve verses, which Loretta had to cut down for the recorded version. Intensely honest, this song graphically depicts the poverty in which Loretta grew up, tempered by the love of her parents. The song ends with a nostalgic return to see the ruins of their old cabin; nothing but the floor, and Loretta’s memories survive. But this environment has been preserved for posterity in this song. Like Dolly Parton’s memorialization of her ‘Tennessee Mountain Home’, this is not merely entertainment, or even art, although it is both; it is also oral history at its finest.

The now-forgotten ‘I Wanna be Free’ reached #3 in 1971, which Loretta wrote on her tour bus on her way home to Nashville. It is about a woman longing for freedom from the last vestiges of her dead marriage, with an optimistic breezy feel as she throws away her wedding ring:

I released my heart,
My soul and my mind
And I’m a-feelin’ fine
I broke the chains, a ring of gold
Before it broke my mind
Well, look who’s cryin’, and it ain’t me
But I can hardly hear and I can’t half see
Oh, I wanna be free

‘You’re Lookin’ At Country’ hit #5 later that year, after Loretta had won her first ACM award as Female Vocalist of the Year. It is another song defining Loretta. In some ways it is a forerunner of today’s self-conscious statements of being country, but it rings far truer than most of those, although (like ‘I Wanna Be Free’) it isn’t one of Loretta’s very best songs. Addressed to a potential suitor, she declares:

You don’t see no city when you look at me cause country’s all I am
I love runnin’ barefooted through the ol’ cornfields and I love that country ham
Well you say I’m a-made just to fit your plans
But does a barnyard shovel fit your hands?
If your eyes are on me you’re lookin’ at country

The semi-comic Shel Silverstein tune ‘One’s On The Way’ was a very memorable #1 hit for Loretta in 1971. It stayed at the top for two weeks, which was very unusual at that date. To a clip-clop rhythm, the protagonist, a harried housewife and pregnant mother in Topeka, Kansas, reads wistfully about other women’s lives (both glamorous stars and city women) compares them to her own mundane life, where:

“You’re bringin’ a few ole Army buddies home?!
You’re callin’ from a bar ? Get away from there!
No, not you, honey – I was talkin’ to the baby – wait a minute, honey, the door bell!
Honey, could you stop at the market and – hello – hello – well I’ll be!”

Here in Topeka the flies are a buzzin’
The dog is a barkin’ and the floor needs a scrubbin’
One needs a spankin’ and one needs a huggin’, Lord, one’s on the way
Oh gee I hope it ain’t twins again

Loretta shows a good turn for comedy as she brings this to life, and the effect is all the stronger because she takes it seriously and underpins the surface comedy with a sense of very real difficulties. One wonders how she would have done if she had followed Dolly Parton into acting.

‘Ain’t It Funny’, written by Tracey Lee [a pseudonym for Loretta’s eldest daughter Betty Sue), was recorded in December 1972 at the same session as the controversial ‘The Pill’ (not on this set because it wasn’t released as a single until 1975), and appearing on the same album as the better-remembered ‘Rated X’ (also omitted here), 1973’s Entertainer Of The Year (named in honor of Loretta’s CMA win). It is a mellow-sounding ballad with a tart sting in the lyrics as it contrasts childhood innocence to adult attitudes:

The kids all say grown ups are strange
And aren’t they?
They teach their kids not to do as I do but as I say
They cry for peace and then make war
And wonder what they’re fighting for
Oh ain’t it funny?

We pick up the story again in 1973 with Loretta’s move to MCA, and the # 1s ‘Love Is The Foundation’, an attractive love song with a pretty tune written by William C. Hall and a more pop sound, which stayed at #1 for two weeks.

A much better track from the same album was the up-tempo ‘Hey Loretta’, another tongue-in-cheek Shel Silverstein composition obviously written especially for Loretta. It has Loretta threatening to leave her neglectful husband for an uptown life, gleefully anticipating his response:

And you’ll say, “Hey Loretta
I love you more than my Irish Setter
Hey Loretta, don’t leave me alone
Hey Loretta, I swear I’m gonna treat you better
Buy you brand new overalls
if you’d only come back home”

‘What Sundown Does To You’ (written by Carl Knight) came from the same session as the latter and is full of attitude, to the extent of being a little shouty at times as Loretta complains about her man honky tonking all evening and deciding to join him. It is another odd inclusion as it was never a single, let alone a hit, and some of Loretta’s biggest hits were ignored, such as the 1969 #1 ‘Woman Of The World’.

We’ve been using these hits collections as a way to focus on the highlights of Loretta’s career. The album was re-released on CD but is only available used at high prices, although it can be downloaded. I would recommend instead investing in the excellent three-CD box set Honky Tonk Girl which includes all these tracks and many more (70 in all), which is the best collection of Loretta’s work from the 60s and 70s, with most of her hit singles and a few outstanding album tracks including a sampling of her duets with Ernest Tubb and Conway Twitty.