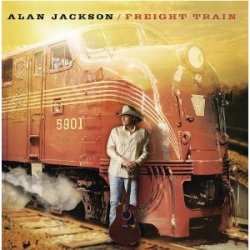 I was distinctly underwhelmed by Alan’s last album, Good Time, and as a result I was concerned about what to expect this time around, especially as I wasn’t impressed by the lead single. Thankfully the album is a considerable improvement. Alan has written most of the songs again, but he seems to have regained his muse, which was noticably lacking last time around. Keith Stegall is in the producer’s chair as usual; always reliable, he does one of his best jobs here, making every song sound good.

After that initial sense of apprehension, then, it was with a great sense of relief that I heard this album kicking off with some fiddle as ‘Hard Hat And A Hammer’ (one of the tracks which was pre-released on iTunes) opens the album with one of the best of Alan’s trademark tributes to the working man, described here as the “kind of glue that sticks this world together”. In the outro, he even remembers to include a nod to the working woman.

In contrast, there is a paean to the joys of escaping from it all for a life at sea in ‘That’s Where I Belong’.

That lead single and current top 20 hit ‘It’s Just That Way’ is one of the few songs not written by Alan himself; it comes from producer Keith Stegall, Vicky McGehee and Kylie Sackley, and is one of the record’s dullest moments. Alan sings it beautifully, but the song is just plain dull. I cannot imagine why it was thought a suitable first single. The only other song as lackluster on this set is Alan’s own ‘Big Green Eyes’.

A more enjoyable love song is the beauty and cheerful ‘I Could Get Used To This Lovin’ Thing’; it breaks no new ground lyrically but is enjoyable to listen to. The closing ‘The Best Keeps Getting Better’ is a more mature appreciation of a love which has grown stronger and deeper over time despite ups and downs, which is clearly addressed to Alan’s wife of 30 years – the perfect anniversary song:

I love you now more than ever

Alan draws more inspiration from his family with ‘After 17’, a tender portrait of his daughter as a young woman growing up, and “suddenly a child no more” as she tries to “find her place in this crazy world”.

The other love song here is the charming ‘True Love Is A Golden Ring’, which Alan wrote with Roger Murrah a few years ago and gave his nephew Adam and his wife and singing partner Shannon (the Wrights) to record on their excellent self-titled eight-track EP. Alan’s own version, which should bring this lovely song to a wider audience, features Rhonda Vincent on backing vocals, way back in the mix.

Alan has been very supportive of Adam’s career, and here he records the sad ‘Taillights Blue’, co-written by Adam with Jay Knowles. This has a man whose lover is driving away for good, saying,

‘Every Now And Then’ is another downbeat ballad about lost love. This time the protagonist is almost, but not quite, over an old love, with Alan producing a more casual vocal than usual which makes it sound deliberately undramatic, especially in the first verse – a simple, matter-of-fact statement of something which cannot be denied rather than an emotional outpouring, and it is all the more effective for being so understated.

The lively title track comes from Canadian Fred Eaglesmith, and is an up-tempo lament about a troubled relationship with a bluegrass feel (and great playing) and train sounds which has the protagonist wailing, in a brilliant analogy:

This is great, and one of my favorite tracks. Two fiddle players are credited on the album, with no specifics for each track, but my guess would be that bluegrass fiddler Andy Leftwich is on this track.

My favorite, though, is Alan’s cover of Vern Gosdin’s top 10 hit from 1977, ‘Til The End’. While this was my most anticipated track it was also the one I was most worried about, as Vern Gosdin was such a superb vocalist I frankly doubted that Alan’s version would live up to the original. The inspired decision to make this a full-scale duet with Lee Ann Womack (where the original had a prominent harmony from Janie Fricke) brings a new dimension to the song, bringing the declaration of eternal love to the forefront and making it mutual, where the original feels more focussed on the loss of the loved one. Lee Ann sounds beautiful, and the pair’s harmonies are sublime. This track is outstanding, and the best recording I’ve heard so far this year.

Overall, this is a definite return to form for Alan, and one of the best major label releases in the last couple of years.

Order Freight Train from amazon, or any other major retailer.