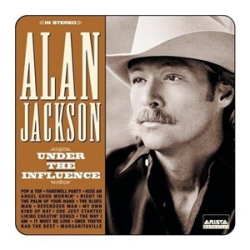 Like most established artists, Alan Jackson recorded an album of songs in tribute to the artists that influenced him as a musician, singer, and songwriter.  Some artists do this after their commercial stars begin to fade and others release covers albums while they’re at their apex, like Alan did.  Aptly titled Under the Influence, the track list is taken directly from the jukeboxes of America.  Though he picked some obscure hits, these tunes are all honky tonk classics and the subjects of drinking, cheating, and hard times are aplenty throughout.  Meanwhile, Jackson and producer Keith Stegall stick close to the original arrangements on many of the songs, and even the album’s cover art is a throwback to yesteryear with its old-fashioned font and the listing of every track on the album’s cover.

Kicking things off is the album’s first single, ‘Pop a Top’.  The tune was written by Nat Stuckey and was originally a hit for Jim Ed Brown, whose version included a sound effect supplied by the opening of a soda can.  Jackson employed the same tactic here, but only on the song’s intro.  The get high when you get low tune peaked at #6 on the Country Singles chart in late 1999.

Gene Watson took the darkly brilliant ‘Farewell Party’ to the top 5 in 1979.  The slow country waltz features the narrator singing of his own funeral to the woman who he knows will ‘be glad when he’s gone’.  On the brighter side is ‘Kiss An Angel Good Morning’.  This is one that follows as close to the original as any on the album, and Alan’s warm vocal matches Charley Pride’s note for note.

One of my favorites on the set is the clever ‘Right In the Palm of Your Hand’.  This med-tempo number tells of a man and woman who are never satisfied in their relationship, with both always looking for greener pastures.  Neither realize that true love is ‘right in the palm of their hand’. Hank Williams Jr. penned the semi-autobiographical ‘The Blues Man’ in the late 70s .  With its smooth melody and almost-love song chorus, it’s mostly melodically driven, but the real punch from the song comes from the lyrics.  Many songs have been written about the ups and downs of touring life, but none as poignant or memorable as this song.  Released as a single, the darkly honest lyric might have been a bit much for country radio in early 2000.  The song failed on the charts, barely cracking the top 40 and now holds the distinction as Jackson’s lowest-charting single since his debut.