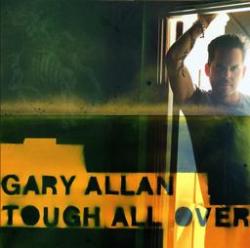 Album number six for Gary Allan should’ve been a much happier proceeding than what it turned out to be. He was coming off of two platinum albums, and three number one hits. For most artists this would be a cause for celebration. While recording his sixth studio album Gary was dealt a really bad hand in life. His wife of 3 years took her life. Reports said he had no idea what led her to make that decision and throughout this album Gary is still questioning what happened.

The album opens up with the title track, a rocking little number called ‘Tough All Over’. Written by Odie Blackmon and Jim Lauderdale, this is the happiest we’ll see Gary for the remainder of the album. It’s one of the weaker tracks, but serves its purpose of getting you ready for a really heavy and hard to listen to album.

For the lead single and second track Gary chose to cover frat-rock band Vertical Horizon’s ‘Best I Ever Had’. It’s a testament to his vocal talent that he’s able to turn such a song into a heartbreaking ballad. The lyrics to this one always struck me as a perfect fit for his situation. There’s been a lot of rock songs covered by country singers but this is one of the few that actually merits some listening. The song continued his streak of hits making it into the top 10 peaking at #7.

As we move deeper into the album the pain Gary was in while recording starts to become clearer. ‘I Just Got Back From Hell’, written by Gary with Harley Allen, has a stripped down feel without actually being stripped down. This is the song that most obviously deals with his wife’s death. With lines like “Well, I’ve been mad at everyone, including God and You / When You Can’t Find no one to blame you just blame yourself” and Forgive me if I had any part / if I ever broke your heart in two / forgive me for what I didn’t know / for what I didn’t say or do” we find Gary still doesn’t know what he did wrong.  A missed opportunity for a great single here, but it was probably too personal to Gary to be released.

The next two tracks speak of the end of marriages. The first, ‘Ring’, sounds bleaker than if it had been recorded by any other artist. It’s not meant to be a happy song really, but due to the circumstances it was recorded in, it sounds almost haunted. The way Gary sings the lyrics it almost sounds like he’s going crazy.  The second song, ‘Promise Broken’, is referencing marriage vows and other broken promises. It’s a good song but on this album it gets caught between two of the stand out tracks and seems to get lost.

‘Nickajack Cave (Johnny Cash’s Redemption)’ is one of the most praised songs on the album. Every time the album is brought up in a discussion you can bet somebody will mention this song. I don’t think all the praise is warranted, unlike the rest of the songs this one externalizes the pain. Every other song is about dealing with loss, this one ruins the flow of the album in my opinion.

The second single and biggest hit off the album was written by Tommy Lee James and Cyndi Goodman better known as Cyndi Thomson, was ‘Life Ain’t Always Beautiful’. This is the strongest track on this album, the vocals, lyrics and music all come together perfectly, none of them overpowering each other; rather they all complement each other. It’s a great song to listen to if you’re going through a tough time, it gives hope for the future while still making you realize that tough times are there to make you a better person.

‘He Can’t Quit Her’ is a little over produced in some areas and is very rocking compared to the subdued feel of the rest of the album. Like with ‘Nickajack Cave’ it loses some of the feel of the album, as there’s little reflection going on here. Unlike the other track though there is a stronger connection, the song deals with a guy who ends up on the wrong end of a .45, and if you know the details on his wife’s suicide you’ll realize why this fan favorite remains an album track.

While not a favorite track of mine, the vocal on ‘What Kind Of Fool’ brings back the haunted disbelief that made ‘Ring’ such a punch to the gut. This song finds Gary asking what kind of fool would break this beautiful woman’s heart, no doubt knowing full well it was he who did the breaking. The only problem I have with the track is it gets repetitive by the end.

The best sounding song on the record due to some great fiddle and steel playing by Hank Singer and Robby Turner respectively, it’s also the second song that Gary had a hand in writing so far. It’s a common feeling being sung about here, after someone leaves us most times we don’t want to be reminded of them, so you have to pack up the things that remind you of them. Gary’s vocal is powerful here, a particularly bright spot is where he sings “’cause I know you’re gone forever”. By the time he gets to the word “forever” he’s singing has turned into a whisper. It’s a nice touch that elevates the song to the top of Gary’s discography.

Recording for the album supposedly started before the incident happened with his wife and ‘No Damn Good’ is one of those early tracks to make the finished project. It has a more driving beat that most of the other tracks and would’ve fit nicely on to any of his other albums. If the term filler had to be applied to any of the tracks this would be the one, it fits the overall theme of the album but feels lightweight in comparison.

The final track, ‘Putting My Misery On Display’, is the only song Gary wrote by himself and it’s the perfect song to summarize the album as a whole. “I Don’t do this For Fame / I do it for me / it soothes my soul and keeps my sanity” pretty much sums up what this album represents for Gary. He didn’t record this for commercial gain or to further his career, instead it was therapeutic for him, and kept him sane when he probably wanted to go crazy.

This is my favorite album Gary has put out so far, but the one I listen to least. It’s his strongest and most cohesive work, yet due to the very dark and heavy feel to the album it’s often hard to listen to in one sitting. We get some of Gary’s best moments on this one with practically no filler to be found. Not all tracks are masterpieces, but the album as a whole is as close to perfection as Gary will probably ever come. It’s too bad it took such a tragic set of circumstances to get it and if it’s what Gary needs to make material this good I hope he never tops this album.

Tough All Over is available at site.

5 responses to “Album Review: – Gary Allan ‘Tough All Over’”