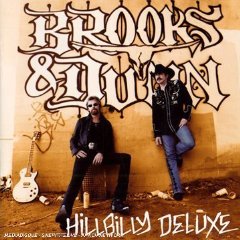 After the success of Red Dirt Road, the duo had issued a second volume of Greatest Hits, and unusually the new singles released from that (‘That’s What It’s All About’ and ‘It’s Getting Better All The Time’) had done very well. Their next studio album, 2005’s Hillbilly Deluxe, shares its title with a Dwight Yoakam album from the 1980s. Brooks & Dunn’s take focuses rather more on the second part of the title than Dwight’s, with a very glossy feel. The tracks featuring Ronnie Dunn on lead were co-produced with industry veteran Tony Brown, but the overwhelming impression of this album is that Brooks & Dunn had got into something of a rut, and this album offers yet more of the same.

The leadoff single, the rocked up and (unintentionally?) ironically titled ‘Play Something Country’ was certified gold in its own right, and was what now appears to be their last ever #1 single. The song was written by Ronnie with his favored writing partner Terry McBride, and was allegedly inspired by Gretchen Wilson. The pair also wrote the ballad ‘She’s About As Lonely As I’m Going To Let Her Get’, a pretty good song about resolving to be the new love of a woman encountered in a bar, which features a fine Ronnie Dunn vocal with slightly (and unnecessarily) amped up production. ‘Just Another Neon Night’ has a similar feel and another barroom theme. Less successful is the part-spoken and also heavily produced ‘Whiskey Do My Talking’, which is just not very interesting.

There was one departure from formula, in the shape of ‘Believe’, which Ronnie wrote with Craig Wiseman, and which was the album’s second single. Surprisingly, ‘Believe’ only reached #8 but had much more impact than that suggests. It sold in high numbers, also being certified gold, and was widely acclaimed as the duo’s best single in years, also winning the CMA Single of the Year award in 2006. The Academy of Country Music rewarded Ronnie and Craig by naming it Song of the year in 2005. It opens as a story song with a conversational low key vocal on the verses and a big chorus, with a churchy organ backing and gospel backing vocals at appropriate moments which support Ronnie rather than taking over as is sometimes the case when gospel choirs are used in country records.

The follow-up single, ‘Building Bridges’, featuring harmonies from Sheryl Crow and Vince Gill, was an attractive song with a pretty tune. It was a Hank DeVito /Larry Willoughby song, versions of which had been unsuccessful singles for both Willoughby and DeVito’s ex-wife Nicolette Larson in the 80s. Brooks & Dunn’s version did much better, and reached #4, and it was named the ACM’s Vocal Event of the Year in 2007.

The title track was the last single, and performed more disappointingly, topping out at 16. The chorus talks about “slick pick up trucks”, and this frankly boring and formulaic Southern rock style track feels altogether too slick for comfort. Ronnie Dunn is a great singer, but he needs better material than this to let him shine. He got it with my favorite track, the sensitive lost-love ballad ‘I May Never Get Over You’. Almost as good is the tender Darrell Brown/Radney Foster song ‘Again’, about falling in love, which closes the album on a positive note. It’s a shame neither of these was released to radio.

Kix was largely sidelined here; he only got four lead vocals to Ronnie’s nine, none of them on particularly memorable songs, and three of his tracks were the original songwriter demo recordings. Most of the money invested in this album must have gone on some of the big production numbers on Ronnie’s tracks. The harmonica-led ‘My Heart’s Not A Hotel’, written by Rob Crosby and Allen Shamblin, and co-produced by Mark Wright, is quite a nice song with the kind of vulnerable lyric suited to Kix’s voice, about a man in love with a woman who is basically using him as a convenient option, but disappointingly he sounds rather uninvested vocally. Kix sounds better on the original demo of his own mid-tempo ‘One More Roll Of The Dice’, which he produced with co-writer Tom Shapiro, but the song is filler and once again the production is too heavy for my tastes. ‘She Likes To Get Out of Town’, written and produced with Bob DiPiero, is both generic Brooks & Dunn and over-produced.

The story song ‘Her West Was Wilder’ from the same team is more interesting, but would have been better still with more low key production. It tells of a woman who is just a little too much for the narrator to hold:

While this was one of the duo’s less inspired efforts, there was enough here to appeal to their entrenched fanbase. The album reached #1 on the country charts and sold platinum.