Toward the end of the 1980s, Reba McEntire began moving away from the hard traditional country sound that made her a star and an industry favorite.  As the ’90s dawned, gone were the fiddle-laden numbers on a Reba album and they’d been replaced by slick electric guitar-driven ballads.  Some point to this as the artistic demise of the singer, others like myself, see this as the point where Reba came into her own and began reaching for the stars, taking country music to places it had rarely, if ever, been before. Records like Rumor Has It and It’s Your Call laid the ground-work for this sort of full-on pop-country album, but hadn’t taken the concept to the extreme that Read My Mind does.

With this album, we find an artist at her peak, both creatively and commercially.  These songs might not have the instrumentation that’s expected of a country album, and Reba’s trademark twang is notably missing on several tracks, but we find the songstress tackling topics of falling in love, saying goodbye, awkward encounters, the plight of the single woman, and even the taboo subject of AIDS, among others.  It’s basically a set of universal songs against a backdrop of adult contemporary tracks.

A sort of electronic keyboard opens the album before an easy-listening sax takes over on the clever ‘Everything That You Want’, signaling from the very beginning that this isn’t going to be your typical country album.  Though the production is layered on this track, the different elements come in at various intervals and make for an interesting listen.  The romantic ‘Read My Mind’ follows, which finds the shy narrator wishing the man she admires could just read her thoughts and save her the chore of putting those feelings into words.  With its warm melody, it’s one of the most romantic songs in Reba’s catalog.

Read My Mind was released in April of 1994, just as country music was at its commercial apex.  It bowed at the #2 position on the country albums chart and the Billboard 200.  Over the course of the next 12 months, the album would spawn 5 singles, 4 of which made it to the top 10, with 1 topping the charts.  During the singles’ respective chart runs, the disc managed to sell 4 million copies.

The album’s lead single is the snappy ‘Why Haven’t I Heard From You’, which rose to the #5 position on the country singles chart, partly driven by one of the busiest music videos ever, complete with a team of male and female dancers. The song itself is still a radio staple and concert favorite at Reba’s shows.

‘She Thinks His Name Was John’, written by Steve Rosen and Sandy Knox after Knox’s brother succumbed to the HIV virus, was sent to radio as the second single. It’s message of the consequences of a one-night stand and the taboo AIDS subject matter kept it from heavy rotation on some country stations. Never one to shy away from controversial topics in her music, Reba was drawn to the song from the first time she heard it, saying in an interview recently, ” I was over at Bluewater Music Company and they played me about 10 or 15. I took a few, and they said, “Hey, before you go, let us play you one song because we know there’s probably nobody else that would sing it but you. And they played me “She Thinks His Name Was John.” I said, “I want it.” And I recorded it. At the time, I didn’t know anyone affected with AIDS, the HIV virus, but I just knew if I could sing about it, hopefully, more people could talk about it and it would bring light to a very unfortunate situation and might help a lot of people. I’m open to any kind of situation in a song as long as it touches my heart.” During the 1994 Billboard Music Awards Reba performed the song with the AIDS quilt behind her to a standing ovation from the audience of industry insiders, but even Reba’s star power could only propel the tune to a very respectable #15 spot on the charts. 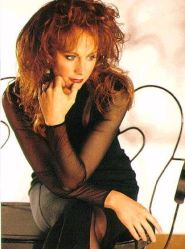 Another classic Reba ballad would be the next single, the elegant ‘Till You Love Me’. Reba sings this story of a determined love-struck woman with maybe a little more power than the song calls for, but it’s still one of my favorites, and hit the #2 spot on the Billboard charts, and #1 on Radio and Records, which is why it appears on her 2005 Reba: #1’s set, the same thing with ‘And Still’.

Reba’s 1990s albums seemed to all follow the rule of having one chart-topper among several top 10 hits, and Read My Mind was no exception as the third single shot to the #1 spot.  ‘The Heart Is A Lonely Hunter’ is as good as 90s pop-country gets, with witty lyrics, a modern message, and a smoking electric guitar solo, provided by Larry Byrom.

For the fourth and final single, Reba had the idea to travel to the Sahara Desert to shoot the music video, but says in her autobiography that problems with getting an entire crew to Africa proved a bigger task than they first thought, so she settled on a closer location: Guatemala.  This was perhaps the first time a country music video was shot in South America, but the result is no less than stunning.  Vocally, this is one of Reba’s finest moments on record and she wrings every drop of emotion from the lyrics, and makes you feel the ache the narrator feels.  It’s the tale of a man and woman, former lovers, who meet again years later in an unlikely place.  They reminisce about old times and he tells her he’s missed her before the kicker comes at the end when up walks his wife and the singer has to fake ‘her best smile’ even though she’s ‘dying inside’.  Reba is truly peerless when she gets ahold of a killer ballad like this one.

The most-dated tracks seem to be the up-tempos, marred by their 90s country production, tracks like ‘I Won’t Stand In Line’ and ‘I Wouldn’t Wanna Be You’ just haven’t aged as well as their tranquil counterparts.  One track I always thought could have been a smash was the brilliant ‘I Wish That I Could Tell You’.  We find a man on the verge of goodbye and searching for the right words.  His partner can sense what’s on his mind, knowing full-well the relationship is over herself.  Neither wants to hurt the other, but it’s clear that the love is gone:

Where do you turn, where do you go
When you’ve finally reached the end of the road
How do you say it I just don’t know
When it comes to leaving you’re on your own

I think everybody has been at the end of a relationship where the spark has just died, and neither wants to hurt the other.  So many emotions are surfacing at a time like that: hurt, regret, anger, angst, and even fear of the uncertainty that’s coming. This song just puts all those feelings into words better than I ever thought possible.  And I, for one, have leaned on its widsom on more than one occasion.

With Read My Mind, Reba delivers a set of all-new songs – no covers to be found on this album – and performs them to perfection.  I’m a little biased since these are the songs I grew up with, and one of the albums that made me fall in love with the music of Reba McEntire.  Start to finish, this is an album of great songs from the genre’s finest vocalist.  It just doesn’t get much better than this.  When it does, I’ll let you know.

This album is widely available everywhere, and of course at Amazon.

Like most of Reba’s music, you can also stream this entire album at Last FM.