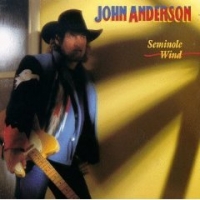 After a couple faltered albums on the Warner Brothers label, where John Anderson scored his biggest successes in the 1980s with hits like ‘Swingin’ and ‘Black Sheep’, the singer moved to MCA.  He recorded two albums under the guise of label-head Jimmy Bowen. (Read Occasional Hope’s review of his first MCA release here.)  In 1991, he signed with BNA Records, working with producer James Stroud.  His first release for the label would turn out to be his most prolific in terms of sales, radio success, and artistry.  Seminole Wind would spawn 4 top 10 singles and go on to be certified double platinum for sales of over 2 million.  It remains John Anderson’s best-selling album to date.

The album opens with the chugging ‘Who Got Our Love’, which served as the lead single.  Though the song stalled at a disappointing #67 on the singles chart, Seminole Wind was just getting started putting John Anderson back on top of the country charts.  The second single was the now-barroom classic, ‘Straight Tequila Night’, a song about a woman whose memories all come back when she drinks tequila.  Luckily, on this night, she’s ‘only sipping white wine’ and the narrator thinks he might have a chance of winning her heart.  The tune shot to the top in March of 1992 and signalled that John Anderson was back in a big way.  Featuring twin fiddles and a chorus that you just have to sing along to, it’s still a very popular recurrent on country radio today.

Following the mega success of ‘Tequila’, BNA released ‘When It Comes To You’ as the next single.  The bluesy tune has a swampy Louisiana feel and Anderson wraps his warm vocals around the lyric like a wisteria vine in a perfect marriage of lyric and interpretation.  It would go on to the #3 perch of the chart.   The song’s writer, Mark Knopfler, had originally recorded it with his band Dire Straits for their On Every Street album.

A sort of eery piano introduces the third song released to radio, the album’s title track, before fiddles and drums kick in and deliver the song’s signature melody.  ‘Seminole Wind’ is perhaps John Anderson’s magnum opus.  In this self-penned tale of the plight of the Native Americans, John sings with conviction:

Progress came and took its toll,
And in the name of flood control,
They made their plans and they drained the land,
Now the glades are going dry,
And the last time I walked in the swamp,
I sat upon a Cypress stump,
I listened close and I heard the ghost,
Of Osceola cry

Jim Shea directed the music video, which was shot in the Florida Everglades and it made CMT’s 100 Greatest Videos list in 2004 and again in their updated version of the list in 2008.

The album’s final single is one of John Anderson’s most-forgotten hits, but one of my favorites on the album. ‘Let Go of The Stone’ peaked inside the top 10 in 1992, at #7 on the country singles chart. John Anderson frequently relied on the pen of Max D. Barnes for his albums, and neither men disappoint with this one. Barnes crafted a beautiful ballad and John and producer James Stroud drown the song with a crying steel guitar. Here, the narrator is trying to convince a lady to forget her past and allow him to save her from her self, ‘Let go of the stone if you don’t want to drown/In the sea of heartache that’s draggin’ you down‘.

The best thing about country albums from this era in my opinion is their lack of album-filler – the truly great albums from this period anyway.  And this is certainly of the great ones.  Half of the album was released to radio, and the other half was definitely radio-worthy.  There’s just not one throw-away track here.

‘Last Night I Laid Your Memory To Rest’ follows the same theme as Reba’s ‘He Broke Your Memory Last Night’ as the narrator finally forgets the memories of his last love with the help of a passionate night with a new love.  It’s another traditional ballad, written by John’s sister Donna K. Anderson and Frankie Treat.

Bobby Braddock wrote ‘Look Away’, the story of a small-town Florida boy (Bobby) who comes back home to see how things have changed.  Trailer parks have popped up in the place of orange groves and tanning salons are now where Jim’s Drugs used to be, all these things the interstate has brought.  He just can’t believe his eyes, and doesn’t even recognize his hometown anymore.  ‘They took the north and moved it south, he said shut my redneck mouth/Dixie’s had a facelift, I guess she’s looking better/But I kinda like the old one/Never will forget her/Look away‘.  Finally, he heads up to Nashville to look up some of his old friends on Music Row, only to be turned away by their secretaries.  Foreign car dealerships and sushi bars have opened in the place of barbecue joints, leaving Bobby asking in the end ‘where the hell am I?’

‘Steamy Windows’ had previously been recorded by Tina Turner for her Foreign Affair album in 1989.  It’s the one track that doesn’t fit the rest of this release, but it’s still an enjoyable up-tempo complimented nicely with some capable harmonica playing by Anderson himself, even if the lyrics are a bit unoriginal.  Kenny Chesney later included it on his 1997 I Will Stand album and likewise, James Taylor recorded it in 2008 for his own Covers album.

‘Hillbilly Hollywood’ opens with much of the same sound as ‘Look Away’, so much that if they were arranged back to back on the album, it would be hard to tell which one you’re listening to.  ‘I dreamed of seeing my name in lights, Grand Ole Opry on a Saturday night, standing where my heroes stood‘, the narrator here has big dreams of making it in Music City or as he has dubbed it ‘hillbilly Hollywood’.

The love-lost lament ‘Cold Day In Hell’ follows the old analogy, ‘love you till hell freezes over’.  The two promised to love each other forver and now that she’s gone, the rivers are running dry, there are no birds in the sky, and the stars have all fallen.  Twin fiddles drive it and though a bit forgettable, it’s a first-class country song.

John Anderson was nominated for 3 CMA Awards at the 1992 ceremony on the strength of this album and its singles.  Though he didn’t take home any trophies, John was a contender in the Male Vocalist, Single of the Year, and Album of the Year races that night, and also performed ‘Straight Tequila Night’ on the show, his first CMA performance in nearly a decade.

Seminole Wind set the standard for a traditional country album in the early 1990s, and for the rest of his releases that decade.  In the process, John Anderson began the most successful chart run of his own career, and gave us a complete album, start to finish, of quality country music.  The arrangements are decidely traditional and the lyrics are first-rate.  I wish I had a dozen more like it.

Seminole Wind is still in print and is available at Amazon.